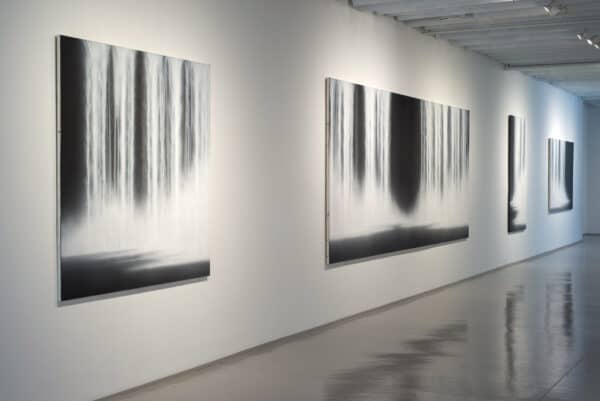 Everything can be divided between polar opposites, dark and light, good and bad, night and day, yin and yang, etc.  That can also be said of Hiroshi Senju’s return to waterfall imagery in his “Beginnings” exhibition across Sundaram Tagore’s two New York locations on 27th Street in Chelsea and Madison Avenue in the Upper East Side.

After seeing Senju’s blacklight installation in Singapore in 2016, the beauty and immediacy of his work has been on this critic’s radar ever since.  There is something both calming and frenetic about moving water, and he is able to capture the picturesque moment like a photographer would, while creating movement and energy like the Futurists did.  The high contrast of black and white pigments in his waterfall pieces has always been one their strongpoints, and in these new paintings, that continues to be the case.   Although, there are a few canvases with blue backgrounds that are similar in tone and vibrancy to the blacklight, where white pigments appear when illuminated.  It is these blue canvases, alongside a few red background works that really showcase what new colors can do to an artist’s work.

Compare them to the paintings of Italian ZERO artists Enrico Castellani and Lucio Fontana where subtle changes in the artist’s palette have significant and lasting changes to the work. By completely changing the color, Senju has augmented the contrast between the water and the earth, reducing the polar opposite of black and white in his other paintings.  The color becomes more of a focus, just as the flat red of a Fontana sets the stage for the violent cut that the artist performs to the canvas.  Whereas Senju adds the lighter white pigments to soften the work, creating an assemblance of harmony in each work.

In his last Sundaram Tagore exhibition in 2017, the artist focused on the newer style cliff paintings, which he made in traditional nihonga style painting.  The charcoal gray on white landscape works were a muted and more delicate undertaking, in comparison the high contrast white on black waterfalls.  As the artist explains, his subjects are universal, but his techniques not.  Since working on waterfall imagery since the early 1990s, the artist continuously evolved the intent, and surface textures of the work.  After a short stint of brighter backgrounds in the early 2000s, the artist once again only focused on the dichotomy of black and white.  The cliff paintings offered the viewer something gentler, more realistic, and more natural, while diverting some of the calm energy of the majestic and soft edges of falling water.

After his experimenting with bolder colors, blacklight responsive pigments, and nihonga, the artist has once again pushed his mastery of mediums in this current show.  For the first time, he is adding platinum pigments, combined with his typical crushed rock, coral, and other natural materials, into his paintings for the first time in the waterfall works.  These new works look and feel the same from afar, but once you get closer to them, and start to move around the room, you immediately see the stark change that the new pigments created.  They respond more to the natural light in the room, and even the time of day.  There is a subtle luminosity to the waterfalls that really makes them stand out from the earlier paintings.  For the seasoned viewer of Senju’s work, the polar opposites of dark vs. light are made much more apparent in this show.  Ultimately, if a collector was on the fence about adding a work to their collection, now is clearly the right time to get something very special.

In recent times, Senju has earned a significant level of exposure with a commission at the Kongobuji Temple in the Wakayama prefecture, a public installation at the Haneda International airport, and a monumental work was acquired by the Metropolitan Museum of Art.  Thankfully, gallerist Sundaram Tagore understands that during these trying times, the need for a strong online exhibition is just what the public needs, and has offered us a phenomenal presentation at www.sundaramtagore.com in addition to his two physical spaces by appointment.