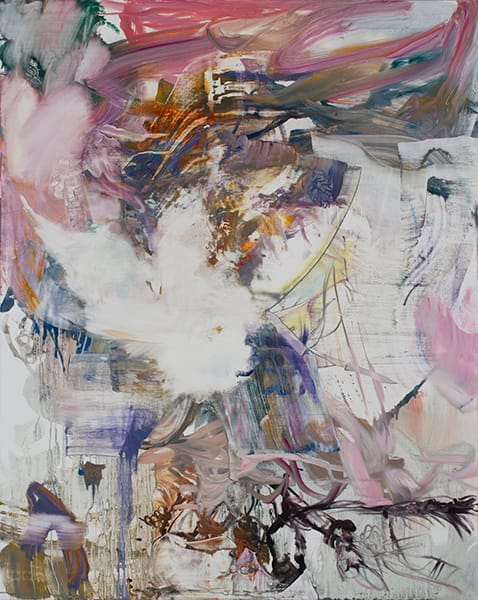 Why did you become an artist?

I couldn’t help it. At this point I would have to say that being an artist chose me. It sounds cliché but that’s how it has worked out. I used to think I should do something more practical, I still think that actually, and so I worked in the social services and as a counselor for a long time, even recently at the Chelsea Foyer in Manhattan. I would work these jobs and then go to the studio to paint. When I had less time to paint I felt terrible. Eventually I realized that I should just prioritize painting so I’m on that track now.

My work has vitality and momentum. It is emotionally real, wild and alive. The union of the painted materiality and subjects are what give my painting a demanding immediacy. One important thing to understand about my work is that it transcends the traditional dichotomy of figuration and abstraction. Instead of operating within these binaries the works range in their loyalty to referential space and they track what I see as I move through the world. It is perceptual in that way and built of many sensations strung along together. The work resists an easy categorization although there are constantly emerging themes such as growth, nature, instability, transition, lurking danger, and survival.
I think the work is unusual because it is earnest and generous without being didactic or thematically concise. The work gets to the reality of simultaneous contradictory experiences and the discomfort of interruption or not having an easy answer on hand. In Split Fires at Slag Gallery there are two fires interrupting each other. The ravaging wildfire theme is consistent, and yet there is a double subject, much like there are double truths in our information culture, or even prepackaged ethical ideologies that you can subscribe to in order to signal institutional credibility without actually having to risk forming a nuanced opinion. We live in contraction and a whirlwind of experience and my work reflects this. I think it is timely.

Right now I have a solo show at Slag Gallery in New York called Earth Slipped and Heaven Spilled. In this new body of work I effectively translated some widely-held feelings into a more personal vocabulary. Before I was leaning heavily on traditional landscapes and compositions of singular authority and now I am integrating a complexity of spaces and subjects that have a new level of emotional accessibility. My old paintings of fleeting landscapes and refuge have toppled into new paintings of spilling heavens and momentary ciphers. The old fecund vistas are now burning and are sprinkled with traps, predators and fleeing animals. The relatability is happening in the narratives with animals and on occasion in the abstractions. In White Jewel (a painting not on display but in the show), the inherent necessity of the abstraction actually creates a kind of referential subject. It goes beyond an abstraction made up of multiple perspectives, speeds and marks in space, and asserts itself with the same intrinsic ‘subjectness’ as Fleeing Horses I and Fleeing Horses II.

Right now you can see my solo show, Earth Slipped and Heaven Spilled at Slag Gallery, which runs until January 2nd. I have an upcoming solo show in March 2021 at Zolla/Lieberman Gallery and I’m currently in an online group show at the Center for Maine Contemporary Art curated by Annika Earley and Tessa Greene O’Brien. I’m looking forward to doing a residency at Monson Arts in the spring and painting my way through the pandemic in the meantime.

Enjoy the ride. I have a small number of friends with enough success to cruise through from gig to gig, but for most people I think this career is irregular and sustained through sheer persistence. Stay focused and don’t forget why you got into making art in the first place. And stop worrying about what other people think. It really doesn’t matter and won’t help your art at all. Make friends with other artists because you will need each other to survive the ride. Let yourself grow with your art, try new things and stay true to yourself. Risk failure over and over again. If you learn along the way that being a studio artist isn’t your thing, no one will judge you for changing paths. Besides, the world needs more artists back in the rest of society to shake things up. Whatever it is, art or something else, stay obsessed.

Either I stop when I get the sense that if I make another mark I will ruin the painting or I walk away when I get fed up with it and have no idea what to do. It can get pretty dark in the studio! Then I wait a few weeks to really figure out what happened in the painting and if it was a success or not. It can be really hit or miss because I am constantly trying so many different things, but that means when a painting goes well it’s a knockout.

Right now it’s a pretty big moment for me because I’m having my first solo show in New York. When I moved to Maine in the spring I felt like I was leaving New York behind. I made as many paintings as I could this summer and it turned into a solo show at Slag Gallery. It’s good to have a place for the paintings to be seen and out in the world. I think it’s a strong show, in large part because the works that I made this summer I made for myself, so it feels like the work is true to what I have to say.
A second instance comes to mind, although I would call it more of an anecdote. I was in graduate school and at that point I was pretty unaware of contemporary art and art history. I had a studio visit with Tal R and didn’t really know who he was yet. We got into an argument over some innocuous comments he made about the particular stakes with which one should approach painting and abandon all else. I don’t know why I was so hard pressed at the time to pick a bone with him but since then I have remembered our conversation as impressive that two artists would argue about the way in which to risk everything or frame the stakes of painting, not whether or not or why the stakes of painting are so high.

To learn more about Jeane and her work, please visit www.jeanecohen.com.