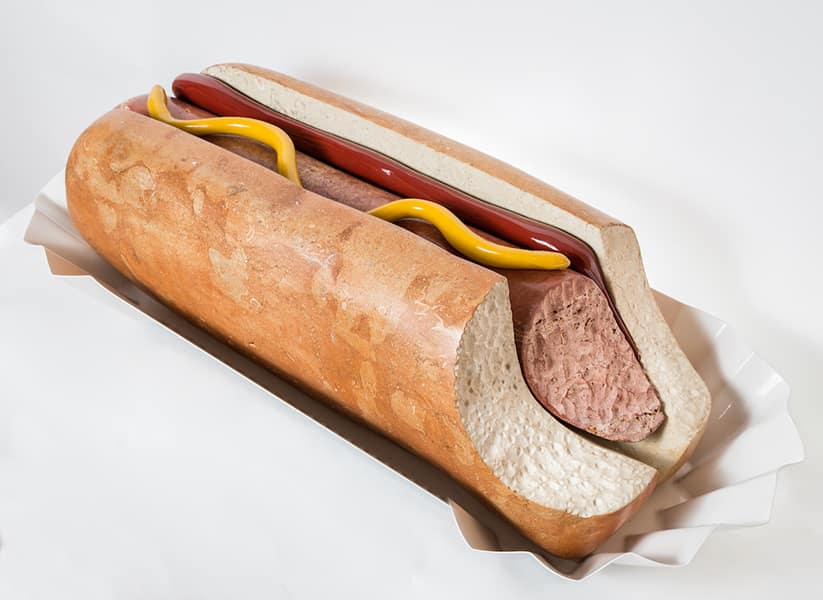 American sculptor Robin Antar was born in Atlantic City, New Jersey in 1957. All of Antar’s current work is rooted in observation. “Whatever is going on, I express it in stone,” Antar says. “It could come out as realism, as an abstract form, or as a combination of both. The style I use is one that best reflects the inspiration behind each piece.”

Ever since I took chisel to stone over forty years ago, sculpting has been my “language” for communication. I’ve sculpted through teenage angst, marriage, divorce, having children and losing one of them to addiction.

In my early years, aesthetic beauty and superficial thought were not a concern as I focused instead on fundamental feelings and basic sensations, creating abstracted sculptures with an uncommon perspective, jarring color and anomalous form. I set up a working studio in Brooklyn after receiving my BFA from the School of Visual Arts in New York and continued carving in a loose, intuitive style rooted in my emotions and personal experiences. I created a series of carved stone knots as an exploration of the formal possibilities of intertwinements. While the imagery of knotting is deeply embedded in our consciousness as a metaphor for unresolvable or transformative conflicts, my choice of marble for this series has connections to nature and high culture in art history. My most powerful work, “David’s Knot in Flames”, reflects this perfectly. Carved in Turkish marble, I created the sculpture in memory of my youngest son who passed away at the age of 26. The knot represents his pain as a victim of child abuse and addiction, but the knot breaks open into a flame, which represents life – his soul rising to Heaven. For me, as a sculptor and a mother, it was also a work of healing.

On a universal level, these abstracted emotions are also symbolic of our struggles as a nation, as individuals who are grappling with the conflicts of daily life and the disjuncture of an American experience that is out of joint.

Over the past two decades, I began moving towards realism to explore contemporary American culture and politics and the strong symbols that have emerged to define – and divide – our nation. My current series presents opposing aspects of Americans’ exterior and interior lives through culture-laden symbols of American middle and working-class products. Polychrome sculptures, life-size and oversized, are exact replicas of hamburgers, hot dogs, work boots, jeans, and cowboy hats. In the process of depicting such icons of commodity culture, I explore the answers to the question: “What is America?” both for myself and for my viewers.

A piece is finished when it has “life.” I’m not afraid to go into a raw piece of stone and “cut the line.” It’s important for the form to have vibrant movement.

I sometimes have to argue with myself to get a sculpture off the workbench. Every artist is like that. I’ll be working on a piece I’ve polished and in the finishing stages and still not be happy with it. Even if I’ve polished it with a 3,000 grit, and it needs to have something changed, I’ll change it. I’m somewhat of a perfectionist with my work.

My newest series, Divided America, emerged as I continued to explore “What is America?” through my work. Themes of conflict and trauma through national crises explore the effects of these events on American history and culture.

Make American Great Again was carved during Donald Trump’s 2016 campaign. The first time I saw him wear the “Make America Great  Again” hat, he was on the campaign trail and it was originally white. At the time, I knew this would become a powerful American symbol – but I never realized how much it would divide the nation.

NY Tough was renamed from the sculpture of a pair of boxing gloves originally titled Win the Fight which took on new meaning during the 2020 COVID pandemic that hit New York City especially hard. The #nytough hashtag on Twitter rallied New Yorkers together to beat the pandemic. We need to hang tough, be there for one another, be caring, remember our humanity and support each other through this really difficult time in our city.

My current work-in-progress, The U.S. Constitution in a Knot, expresses all the craziness that is going on in our history, not as a political statement but as an observation of events and trends.

What is different about your current body of work from previous work?

When I first began sculpting, the forms were abstract and created intuitively, without a model, driven by emotional reactions to personal life events. I can do abstract work with my eyes closed.

My realism sculptures, however, are hyper-realistic, precise depictions of actual objects that are focused on symbolic icons of popular culture. I work from a model of the real object, whether it’s a burger and fries or Oreo cookies. Each work is life-size or oversized. I paint the stone using a special technique I’ve developed over the years so that the sculpture becomes an exact replica, a simulacra of what it represents, down to the teeth marks of a partially-eaten hot dog.  These works imitate form and surface completely in a  trompe l’oeil realism that masks marble’s sensual qualities, in order to comment on our society’s iconic dreamwork of identity and class.

Some of my sculptures incorporate the emotionality of my abstract series as well as Pop culture realism. The U.S. Constitution in a Knot presents an observation of the current state of politics in America as a sculpture based on the motif of the tied knot. The shape and tensions created in my original knot sculpture series are a personal interpretation of my own trauma and conflict. As I worked on this piece using the forms explored in my stone knot series I came to understand that the American dream in the face of conflict and struggle has connections to my own feelings and experiences and that it is important for our society to learn to discuss and release our trauma through art as a way of survival.

Every artist’s work is unique. Throughout my career, even in the beginning, I never looked to other artists, living or dead, for inspiration. I simply began sculpting and allowed my artistic vision to develop naturally.

My realism work, particularly the “What is America?” series, has been compared to the Pop art movement and, particularly, the creative vision of Andy Warhol. While he painted the front of Campbell’s soup cans on a flat canvas, I would create a Heinz ketchup bottle but would also “get around to the back of the object” since my work is three-dimensional. Warhol’s work explored American popular culture through the lens of advertising and celebrity. My sculptures are stone monuments to moments in time, iconic symbols, past and present, that question our collective view of America. Is it the all-American ballpark frank? Blue jeans and penny loafers? American-made work boots? Or has it become Donald Trump’s MAGA hat?

The most personal and powerful sculpture I ever created was David’s Knot in Flames, honoring the passing of my youngest son. The sculpture is permanently installed at Zucker Hillside Hospital where my son received treatments. I later learned that many of the hospital’s patients will touch the sculpture for good luck, in the hopes of overcoming their health challenges. That to me is worth all the money in the world.

One of the biggest moments in my art career came when I became the first female artist accepted on the roster of Pop International Galleries in New York. This Pop art and urban culture gallery represents works by Andy Warhol among other celebrities so my work is in good company! The icing on the cake was when a HuffPost writer called to interview me for an article about it.

Most recently, I was named among the top 100 Sculptors of Tomorrow by Kurt Beers, gallery director of BEERS London, and my work was featured in his award-winning book by the same name published by Thames & Hudson. A luxury London magazine, Square Mile, picked up the story for an article on “The Best Sculptors in the World.”

I will be finishing The U.S. Constitution in a Knot for a potential future exhibition incorporating work from my “What is America?” series. I am also working on a 6,000-pound block of stone that will become a 3,500-pound bag of potato chips as a public sculpture for a future installation.

Keep working and never give up. I had paid my dues in sweat and stone dust by the time I went to art school, but I never stopped working, and I kept evolving. I currently have 40,000 pounds of stone in my garage for future work.

Who are some of your favorite under-appreciated artists that you don’t think get enough attention?

Two Italian sculptors that I feel should have more appreciation are Håkon Anton Fagerås and Jago.

To learn more about Robin and see her work, please visit www.RobinAntar.com.