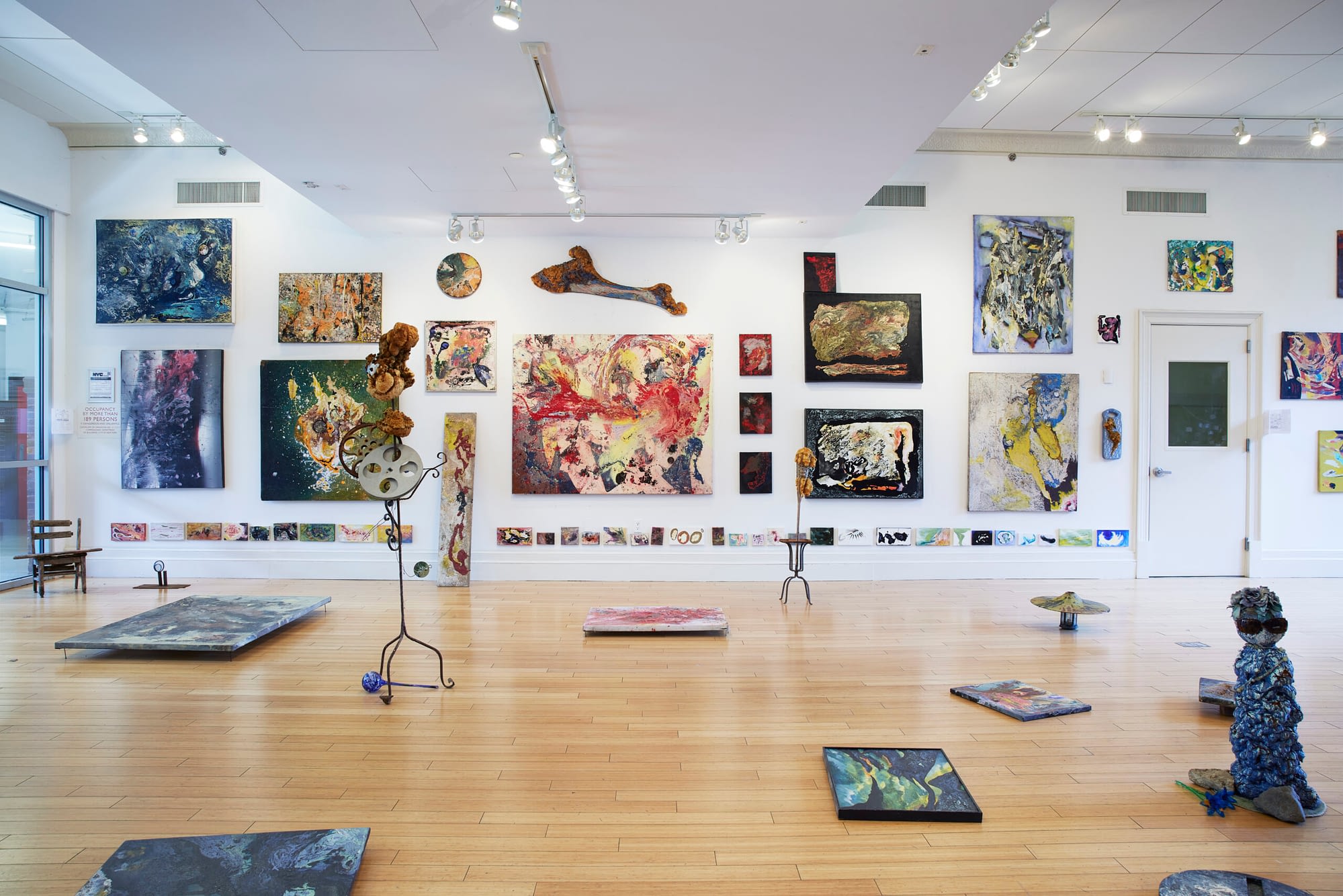 Art and Nature: A Collaboration

It is late one night, and you are out in nature, far away from the city, with your eye pressed up to the lens of a telescope. Distant planets and galaxies appear to be within the reach of your arm. But what would it look like, if the vastness of the universe were encapsulated in the palm of your hand? The answer lies in Ken Cro-Ken’s macro/micro paintings. These mini paintings, which are no larger than the palm of your hand, are nestled within larger paintings, offering alternative perspectives of the same slice of the multiverse. In his own words: “It is for the viewer to determine whether it is a microscope zooming-in for a closer look or a telescope that reveals the greater body from a distance. Which painting is the macro and which is the micro?” Cro-Ken’s playful relationship with the macro and micro forces of Nature is evident in all of his work – whether painting, sculpture, or video.

The work of Ken Cro-Ken, self-ascribed ecosystem painter and environmentalist videographer, is currently on view at PS109 El Barrio’s Artspace in New York City, presented by WhiteBox in collaboration with 2B&2C. The one-man show, entitled Ken Cro-Ken: The Conduct of Paint invites the viewer into conversation with Nature, through exuberant improvisational paintings that simultaneously capture the great expanse of the universe and the delicate intricacies of time in motion.

Working at the intersection of the microscopic and macroscopic, Cro-Ken considered himself a conduit for Nature’s expressivity, co-creating in concert with seasonal and elemental forces. Cro-Ken used chemical catalysts – what he called “Speed Elements” – to set his paintings in motion, and to reveal the invisible “push-pull” forces of Nature. These durational paint experiments were conducted in a variety of climates and atmospheres – in the snow, the rain, and the beating heat of the summer sun – in order to capture the wide range of Nature’s manifestations through the seasons. Through this process, ordinary found objects were transformed into multidimensional “landscapes” of the universe. In the artist’s words: “My pursuit is constant: to remain connected to Nature with a sense of play and all that results from it. I manipulate space, time, and matter, though the matter is never just paint. Speed Elements reveal universal motion and an idea of why the multiverse appears as it does.”

A true experimentalist, Cro-Ken allowed each painting to take on a life of its own, acting both as vessel and witness. “Rather than conjure images in my mind, my imagination is instead challenged to consider external factors that affect the outcome of the process and the painting … paint is not merely color or pigment but an object also subject to the laws of Nature … It goes beyond my imagination but not my abilities or effort to peer into the vastness of the multiverse. With endless combinations of materials, techniques, and countless outside influences, such as weather conditions, I journey into the great unknown. With experience, I begin to recognize external forces that affect this ecosystem-sensitive palette … I prefer to create experiments of which I do not know the basic outcome. My response to unique conditions and unique catalysts is an attempt to understand some of the countless factors involved with each day, each night, each season, and each paint experiment. Such is reactive and proactive improvisation. Speed of time and interactive timing establishes my location within a paint experiment and, ultimately, within the universe.”

Cro-Ken considered Nature a co-collaborator in the creative process, allowing its improvisational alchemy to transform and consummate his physical investigations. Acknowledging the legacy of Abstract Expressionism, he wrote: “Abstract Expressionists recorded gestures, whereas I record my shared experience with the actual world. Each unique paint experiment becomes a surprising dance between action and reaction.”

Action, reaction, and improvisation with time and Nature are evident in Cro-Ken’s entire oeuvre. In addition to his paintings and writings, he engaged in time-released performances with composer, improviser, and oboist Matt Sullivan. Live and pre-recorded videos of Cro-Ken’s painting experiments were juxtaposed with Sullivan’s music, creating a multi-sensory experience for the audience. An archival recording of the time-release performance,“Multiple Oneness,” by Cro-Ken and Sullivan, can be viewed in the exhibition.

Cro-Ken died on July 30, 2020, as a result of cancer contracted at Ground Zero, where he taught art to local children. In celebration of his life and legacy, “Ken Cro-Ken: The Conduct of Paint,” is being featured as part of WhiteBox’s ongoing Seminal Artist Series. The title of the exhibition refers to the artist’s lifelong engagement with the writings and ideas of Transcendentalist Ralph Waldo Emerson – in particular, his work: “The Conduct of Life.” Inspired by Cro-Ken’s curatorial eye, as mediated by his longtime collaborative partner, Matt Sullivan, the exhibition was designed and organized by Juan Puntes and Kyoko Sato of WhiteBox. It is accompanied by an illustrated catalogue, including a selection of Cro-Ken’s musings on the relationship between artist and Nature – the ultimate creator. The artist’s collaboration with Nature reflects Emerson’s philosophy: “Nature is not only the material but also the process and the result. All the parts incessantly work into each others’ hands…”

The survey exhibition sprawls across the exhibition space, the rear garden, and even the grand stairwell of El Barrio’s Artspace, infusing the monumental historic building with Cro-Ken’s vibrant spirit and energy. When you enter the space, it is as if you are entering the colorful universe of Cro-Ken’s imagination – you become fully immersed in his world. In the gallery’s rear garden, you will find sculptures of various shapes and sizes, and numerous objects, both found and constructed, in various states of decay – a natural phenomenon that fascinated Cro-Ken. The garden installation is an homage to the artist’s original outdoor garden studio, in which he worked for the last two decades of his life. He named his studio, “2B&2C,” not only because it was located on 2nd Street, between Avenues B and C, but also, because it was a place to be creatively nourished, and to see inspiration blossom – a bustling hub of music, painting, conversation, improvisation, and nature. Cro-Ken’s legacy will live on through the work of an arts organization currently in formation, 2B&2C, dedicated to the artist’s cosmic-plastic creative vision.