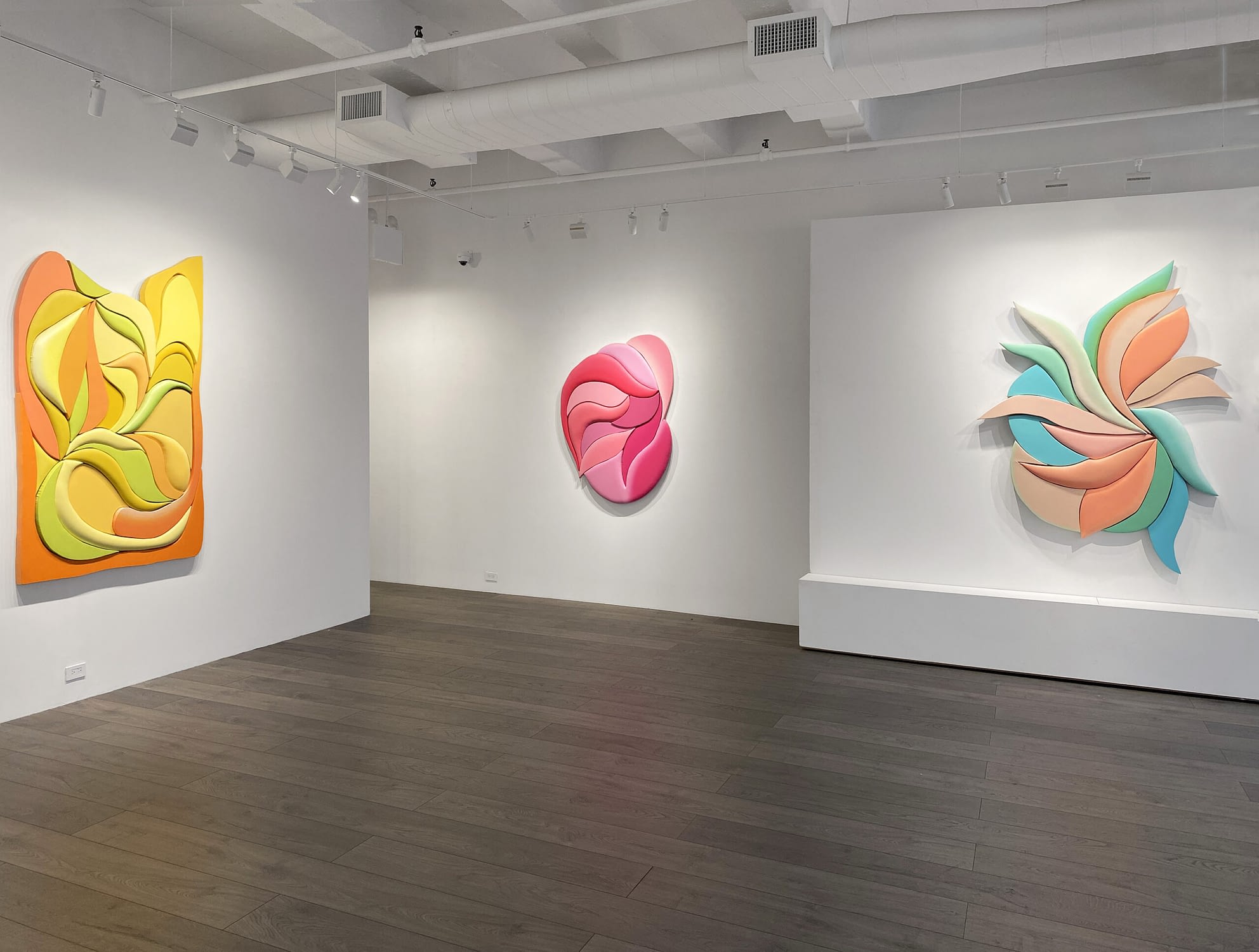 Leah Guadagnoli’s “Love Lies Bleeding” is her first solo show with Hollis Taggart since joining the gallery in 2020. Her three-dimensional wall sculptures are bold, organic, and tantalizing. Taking place from October 14th– November 13th, 2021, the show offers nine new works all created this year.
The artist lives and works in New York’s Hudson Valley town Hillsdale. Obtaining her BFA at the University of Illinois at Urbana-Champaign and her MFA at the Mason Gross School of the Arts at Rutgers University, she already has an impressive exhibition list under her belt including solo shows at the conceptually focused Asya Geisberg Gallery and the influential Victori + Mo (now Dinner Gallery), and collective exhibitions at leading galleries Freight and Volume and White Columns. In addition to her painting practice, she currently teaches at the University at Albany.

Featuring nine new works drawing heavily on their physicality, materials used include acrylic, canvas, polyurethane foam, and insulation board to create innovated new compositions that test the boundaries of conventional painting. Once the viewer examines her objects from all vantage points, to view the sides and also tops of the pieces, they will notice the organic and flowy shapes, painted with pastel inspired colors in acrylic paint. They must physically move around the paintings to really understand the artist’s intent. The idea of connecting the viewer to the painting seems to be the most crucial element in these new works.

This concept uses the notion from sculpture, and also Frank Stella’s view that a painting is an object, often created with an understanding of geometry. An artwork must be encountered, not just offer visual stimulation, and Guadagnoli is more than confirming this understanding by presenting it to the viewer.

The works are highly colorful, featuring tones from yellow and orange to purple and blue, and the few inches of depth really give them a greater impact, and more complexity with prominent shadows. The pieces seem to derive influence from stained glass, but they are really about painting. The curvilinear shaped canvases are striking, with rough yet beautiful edges, and are reductionist in all aspects. These new works are a natural progression of an artist who has maxed out the flat surface of her earlier, more traditional paintings.

The artist explains that the work and exhibition title are inspired by Victorian descriptions of flowers, Love Lies Bleeding, representing hopelessness, or hopeless love. Flowers were imbued with meanings, where a hand-picked bouquet could communicate a message without the need of explanation. She also expresses feelings of loss, heartache, and recovery during the COVID era, and one feels that the works are a response to the emotional state she has been in. The focus on beauty and hope are the two main takeaways here, and it’s strongly visible in the new work.

Her older three-dimensional works from 2018-2020 were more geometric, and far more static. The new forms have loosened up into freewheeling shapes, and the colors have intensified greatly. Since transforming from a two-dimensional abstract artist to an object-based painter, she’s been taking increasing amounts of chances, and the more risks she takes as an artist, the more she will impress and push the boundaries of contemporary painting. These organically shaped works are balanced with bold color, and are bringing new formal language to three-dimensional painting.

There are comparisons to be made to other contemporary artists making wall-based paintings, including William Bradley and David Ryan, but Guadagnoli’s work remains more tied to the natural world, and comes across far more minimal in comparison. The work is pushing the notion of what painting can be, but she’s tapping into elements that those who have come before her have not explored when combining fully crafted three-dimensional works that are truly grounded in nature.

Guadagnoli’s work also has roots in the 1960s and 1980s three-dimensional forefathers including Ellsworth Kelly, Charles Hinman, Ron Gorchov, Cesar Paternosto, and others, and she is continuing the discourse on what a painting is, and how to reconfigure the traditional notions of what a canvas can be. She is seeking a new truth in painting by using new elements, such as eliminating brushstroke, and integrating more organic lines. Ultimately, she is working to bring art back to what it should be, visual representation that is not dependent on critical theory, in an age when many artists are returning to critical theory in lieu of artwork that stands on its own merits.

The other noteworthy reference to three-dimension and object-based are would be Donald Judd’s “Specific Object” essay from 1965. Judd’s text is picking up from were Stella left off, and transforms the concept of a wall hanging object, and conceptually declares the third dimension in painting. Guadagnoli’s work is clearly inspired by breaking free of the rectangular plane set against a wall, and the work is freed from its inherited borders. A side mention is also Michael Fried’s essay “Art and Objecthood,” first published in 1967 in Art Forum, where he explains that an object should focus on the viewer’s experience, rather than the relational properties of the work of art exemplified by modernism.

There are three standout works in this show. Got to Grown Down to Grow Up is a large vertically oriented green, blue and beige piece. The most pastel-like palette, and the most floral-inspired painting that truly connects with Mother Earth. The Night Is Neutral is the second with its asymmetrical balance cool tones. The yellow, blue, and grey, with a narrow yellow-green vertical stripe that reflects glowingly against the blue background, creates a sense of earth and sky, while also hinting at the spirituality of Barnett Newman. The artist spoke of loss during COVID, and this is the work that most shows the feelings of loss, grief, and hunting for the good in this world. Cacophony is another favorite by having the boldest color palette, and being the most solid composition ground in geometry referring back to her old style. This painting is the most connected to her previous works, but still has the more aggressive lines that embody her recent paintings, creating a very interesting new dynamic.

With the bold leap forward the artist took for this show, there are certainly great things coming in her future. Make sure to check out her next show at Hollis Taggart, and check out the gallery’s booths at Art Miami and Untitled.