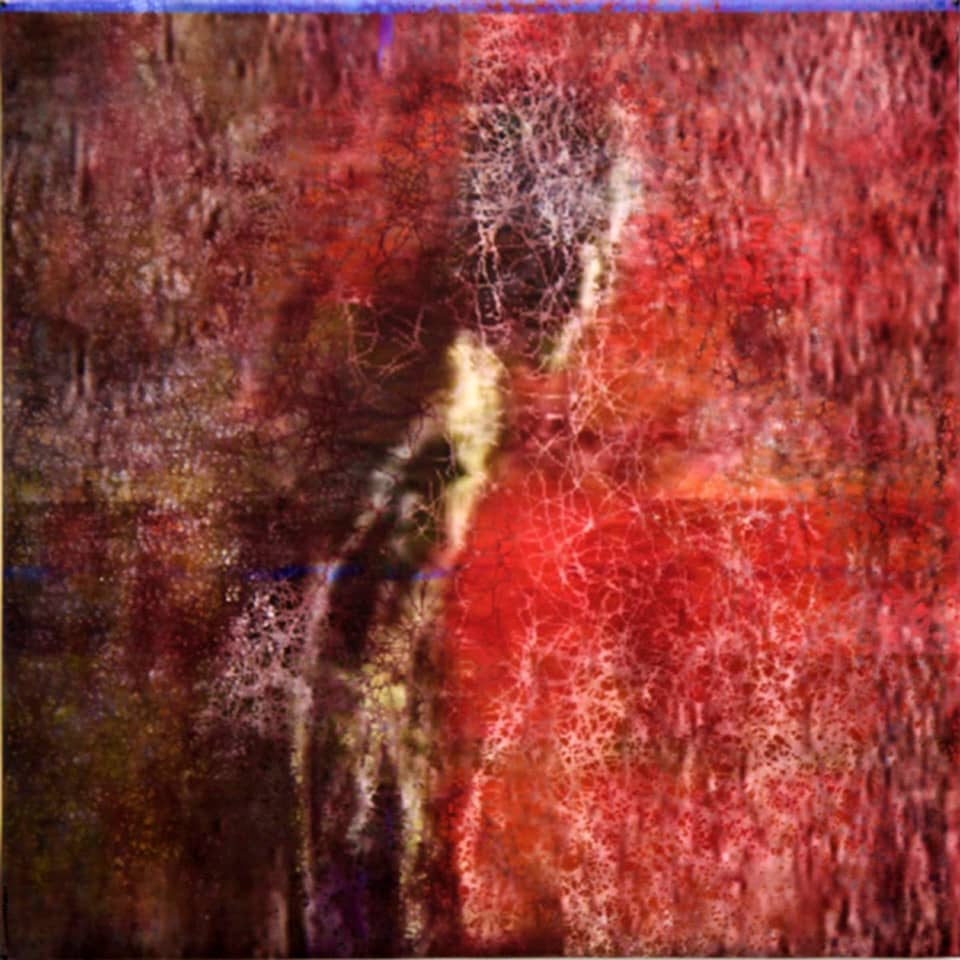 Joseph Nechvatal’s contemporary art practice engages in the fragile wedding of image production and image resistance. Through his version of an art-of-noise, he brings a subversive reading to the human body through computational viruses, articulating concerns regarding safety, identity and objectivity. Since 1986, Nechvatal has worked with ubiquitous electronic visual information, computers and computer-robotics. His computer-robotic assisted paintings and computer software animations are shown regularly in galleries and museums throughout the world.

Marcel Duchamp. Because Duchamp’s entire artistic activity since the “definitive incompletion” of his masterpiece The Bride Stripped Bare by Her Bachelors, Even (La mariée mise à nu par ses célibataires, même), most often called The Large Glass (Le Grand Verre) in 1923 was an exercise in strategic invisibility, giving rise to objects and events which―because they were apparently too impermanent or unimportant or insubstantial, or because they eluded established genre conventions, or because they confused or diluted authorial identity―evaded recognition as traditional “works of art.”

I went to art school, moved to New York City, and began showing my drawings in non-profit spaces during the early 1980s and, through those exhibitions, was invited to show with the commercial galleries Jack Tilton, Brooke Alexander, and Paula Cooper. Good reviews in the press helped.

Dionysus, the apocalyptic, communication excess, the virus, and gender fluidity. Recently I have been inspired by the Virginia Woolf book Orlando (1928) and Antonin Artaud’s prophetic text The Theatre and the Plague, originally presented as a performance-lecture on April 6, 1933 at the Sorbonne (now an essential element in his book The Theater and its Double). In it, Artaud develops the foundations of his Theater of Cruelty by establishing an analogy between the rupture of the civilizational order caused by the “plague” and the “convulsive passions” triggered by the virulence of his transgressive theatrical poetics.

I have also been inspired by, and have worked with, Artaud’s radio play Pour en finir avec le jugement de Dieu, that was recorded in several sessions in the French Radiodiffusion studios during the month of November 1947.

My paintings and sound art works are conceptually situated within my art-or-noise theory (see my book Immersion Into Noise) in that they make use of a complicated turmoil produced from close exchanges within figure/ground relationships that challenges us to think outside of the normal pop system of human perception.

The art of noise is the sensitive use of what Duchamp called the essential element in his art: delay. A finished work for me must also have a delay in perceiving signals―and that delay offers up opportunity for the viewer to fill in her own phantasmagorical content. That puts the imagination to work. If that happens, for me the work is successfully finished.

Orlando et la tempête (Orlando and the Tempest)―shown in the Fall of 2020 at Galerie Richard in Paris―is a series of new virus-modeled artificial life paintings that indirectly addresses issues of gender fluidity within our tempestuous viral and social-political times by imagining nonexistent scenes from the 1928 novel Orlando by Virginia Woolf (the story of an aristocratic young male poet who transforms into a woman overnight and lives a tumultuous life for 300 years). Storms have no gender and mean full-blow fluidity. In Orlando et la tempête, my ambiguous Orlando avatar is embedded into just such noisy chaotic grounds to the extent that normal figure/ground relationships more-or-less merge, playing elusively with what is seen, what is suggested, what is repressed, and what is desired. Though viral issues and gender fluidity are culturally and politically topical, those subjects are nothing new to me. In 2000, I exhibited Computer Virus Project II artworks (with artist’s statements) investigating virtual hermaphrodite complexity in my ec-satyricOn 2000 exhibition, and again in my 2002 show vOluptuary: an algorithmic hermaphornology

I wish them to call my canvases ‘paintings’ because they are one-of-a-kind painted canvases that have been airbrush spray painted through a computer-robotic driven mechanism. Of course, this calls for an expanded definition of the craft of hand painting―one connected to Minimalist art fabrication techniques and Fluxus Conceptualism. They are post-Conceptual paintings that build upon the legacy of Conceptual art, where the concept or idea involved in the work takes some precedence over traditional aesthetic and material concerns. Conceptual art focused attention on the idea behind the art object and questioned the traditional role of that object as conveyor of meaning. Subsequently, those theories cast doubt upon the necessity of materiality itself, as conceptual artists de-materialized the post-Minimal art object and began to produce time-based and ephemeral artworks. Although total dematerialization of the art object never occurred, the art object became flexible, and that malleability, coupled with viral computer processing, has resulted in post-Conceptual painting.

In 1980, I moved from Tribeca to the Lower East Side where I found artistic camaraderie and politically inspired creative energy. There I became closely associated with Collaborative Projects (Colab), the influential post-punk artists group. Those were glory days for the famous Colab projects, such as Just Another Asshole, The Real Estate Show and The Times Square Show. I also helped establish the non-profit cultural space ABC No Rio, where exhibitions were animated by political purpose. In the early 1980s, my art consisted of dense post-minimalist gray graphite drawings (that were sometimes photo-mechanically enlarged), of sculpture, of photographs, and of musique concrète audio collages. In 1983, I co-founded the famous avant-garde art music project Tellus Audio Cassette Magazine. I chose the name Tellus from Tellus Mater: the ancient Roman earth-mother goddess of fecundity.

In 1986, I began using computer-robotics to make conceptual paintings. Some were exhibited at Documenta VIII in 1987.  In 1992, when I was artist-in-residence in France at the Louis Pasteur Atelier in Arbois and at the Saline royale dArc-et-Senans, I created computer virus codes that I used as an artistic tool for my Computer Virus Project I.

In 1995, at the urging of Pierre Restany, I moved to Paris and began splitting my time between Paris and New York.  In 1999, I earned my Ph.D. in the philosophy of aesthetics and technology in England and soon wrote two art theory books: Towards an Immersive Intelligence and Immersion Into Noise.

In 2002 I extended my experimentation into viral artificial life through a collaboration with the programmer Stephane Sikora in a work called the Computer Virus Project II, inspired by the a-life work of John Horton Conway (particularly Conway’s Game of Life), by the general cellular automata work of John von Neumann, by the genetic programming algorithms of John Koza, by the work of John Cage and Marcel Duchamp, and by the auto-destructive art of Gustav Metzger. These works include various series of computer-robotic assisted paintings, digital animations, and a lengthy audio composition entitled viral symphOny, among others audio works. Since, I have created a series of virus-based themed exhibitions of artificial life paintings and animation projections that explore the fragility and fluidity of the human body.

My 28 track, 59’ minute cassette (100 copies) Selected Sound Works (1981-2021) was published on October 15th by Chicago-based Pentiments experimental music and sound art label and has started selling right HERE along with mp3 tracks. My sound art double LP―called The Viral Tempest―will be released by Pentiments in early 2022 in an edition of 200, accompanied by a booklet that reproduced many works from my Orlando et la tempête exhibition. I will be exhibiting at the musée du quai Branly in Paris in an exhibition curated by Frédéric Keck called Microbes in May 2022.

Get close to your contemporaries. Work both in political and aesthetic domains. Mix the two. Study art history with a passion. It will reveal the elders of your tribe. Honor your elders. Do not copy them.

A question with which to make enemies. Answer: All my friends and lovers.

To learn more about Joseph and his work, please visit www.EyeWithWings.net/Nechvatal/