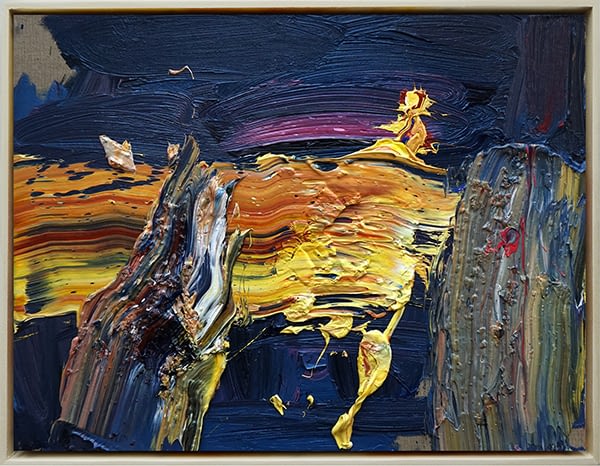 Founded on encyclopaedic and intimate understanding of painting and art history, Freemantle’s work explores the intricate relationship between his body, time and the earth as materials and as inspiration. Spanning egg tempera, mountain rocks and ochre in his paintings, he situates the body as an organic presence at one with the landscape, at the same time as integrating the landscape physically in the human act of painting. In an age damned as Anthropocene, In his passionate and viscerally undeniable canvases, Freemantle consciously and resolutely makes the case for redemption and forgiveness of the human and as a male of the man, on the planet.

Freemantle, has been exhibiting internationally since 2007, with group and solo exhibitions in London, Cape Town, Amsterdam, Johannesburg and Edinburgh, including a major commission by The Standard Bank Gallery, Johannesburg.

That’s an impossible question! I don’t think I can answer with just one artist. At different times in my career I’ve had artist’s who have inspired me deeply. Different artists at different times. At the beginning there was Leonardo Da Vinci. We had a reproduction of his cartoon for ‘The Virgin & Child with Saint Anne and Saint John the Baptist’ (the original is at the National Gallery in London) hanging in our home in Cape Town where I grew up. My father is also an artist, he spoke about the work with such reverence and it rubbed off.

When I finally arrived in London age 17 to study Fine Art I made a pilgrimage to see the original and it was so deeply moving. Then there is Cezanne. He was the first painter that I felt spoke my language. His brushstrokes shimmer and sparkle. They describe a relationship with nature where he is clearly at one with it, not separate. His many paintings of Mont Sainte-Victoire are a single masterpiece. The past 10 years I have looked more at Howard Hodgkin and Giorgio Morandi than any other artists, with the exception perhaps of Giotto. I feel like they sit beside me in the studio – at either side, like guides, or friends hopefully. Hodgkin’s bold, ecstatic, juicy brushwork has led me though many difficult moments in the studio. And Morandi, he’s like a quiet Zen master, reminding me that simplicity is everything. And I haven’t even mentioned Goya, Velazquez, Rothko. Then there’s Joseph Beuys…

I’ve always been an artist, for as long as I can remember. Making a living exclusively from my work has always been my ambition and I feel blessed to be able to do that.

I take influence from many sources. My work explores the intricate relationship between my body, time, and the earth as materials and as inspiration. I place myself in nature as a daily practice – climbing mountains and sleeping in forests. At the edge of my comfort zone is joy, freedom, sometimes extreme hardship. That’s where the best inspiration comes from.

I don’t really compare my work to other work out there, or I try not to. I’m looking inwards to speak as directly as I can. I paint what I want to paint, how I want to paint it. If this makes the work different then that’s a bonus but not the aim.

Just before you ruin it, that’s when it’s finished. It’s a real thrill walking that knife edge – pushing a work to the edge, knowing when to stop. You have instinct to guide you but that’s all. You can’t stop before that because then the work is dull. You have to be willing to mess it up. You know there is a precipice ahead of you and you have to run to it, knowing you may go off the edge.

I have spent the past year making small works – I’ve been releasing a new work on Instagram every day for 268 days now. I began with the idea of a daily practice, and a regular engagement with Instagram – just when the world was shutting down. So 100 works/days/pounds came and went, and now I’m on day 168 of my 200 works/days/pounds project – almost all of the works have sold to collectors all over the world. It’s a joy to have this daily engagement. The works have all been about 16 x 12 in | 40 x 30 cm and I’ve been playing with about five main themes. The common thread has been working towards a more authentic, more instinctive brush mark. On the small scale it is easier because a single mark can cover the surface easily. The challenge I have set up for myself is to maintain this energy but scale it up. I have just closed a solo show in Madrid with some of these larger works, and I felt like I made a breakthrough with some of them. The new works in the studio are building on this.

Painting is my language. Oil paint particularly, there’s nothing like it. I’m a garage alchemist – I often make my own paint, oil sticks, and charcoal. I’ll sometimes grind a rock I collected on a mountain, or the park near the studio into the paint because it has resonance and just feels right. If I can’t find the texture or fluidity I need I’ll find a way to make it myself. I’m always looking for a better, more authentic, and more visceral way to make the same mark.

I had a traditional training. I began on a different tangent, in my 20s I painted portraits, founded the painting department of The Art Academy, and wrote a book. HRH The Prince of Wales has one of my early portraits. That was a different chapter. A big turning point for me was a residency at The NIROX Foundation in the Cradle of Humankind near Johannesburg. I was there for 3 months and was able to rewire my practice. It was a very important time which culminated with showing at Standard Bank Gallery in Johannesburg alongside heroes William Kentridge and Willem Boshoff as well as my great, great Aunt, Cythna Letty.

I’m making new works, still pushing to scale up and keeping the energy of the recent small-scale experiments in the studio. These works will go to Cape Town for a solo show at SPACE BY, a fantastic gallery project by THE FOURTH. I haven’t shown in South Africa since I moved back to Edinburgh over three years ago so I’m excited to bring these works home.

Next week I am carrying two stone sculptures, two plinths, and three paintings up a mountain to the Bone Caves, about hours into the wild North of Scotland. The Bone Caves are a series of ancient caves that have pulled me for some time now. I’ll install the work there for the day, sleep there that night and haul it all down the next day. I may add to the paintings while I’m there. It will probably snow, and definitely rain. It’s a project with Rafiki Gallery; I pitched the idea to Leo Sartain, Rafiki’s director, and he loved the idea. He’s bringing a film crew to record the madness. The whole thing sits somewhere between ancient ritual – Joseph Beuys declared parts near there to be “the last remaining wilderness in Europe” – and a kind of Sisyphean absurdity. To me It’s really a way of putting myself through a kind of extreme difficulty as an act of reverence to the mountain. I’m I’m bringing my two sons Maximilian and Leonardo along for the adventure.

The best guide is the one that you have within. Listen to your own instinctive voice, trust it. Don’t let yourself be led by trends. The more you follow your own flame the brighter it becomes. You can waste a lot of time following other stuff. Trust me, follow your own.

So many! I have been lucky to have worked with many young artists when I ran Hazard Gallery in Johannesburg. One of the best of that bunch is Pebofatso Mokoena. Check him out!

To learn more about Jonathan and his work, please visit www.JonathanFreemantle.com.