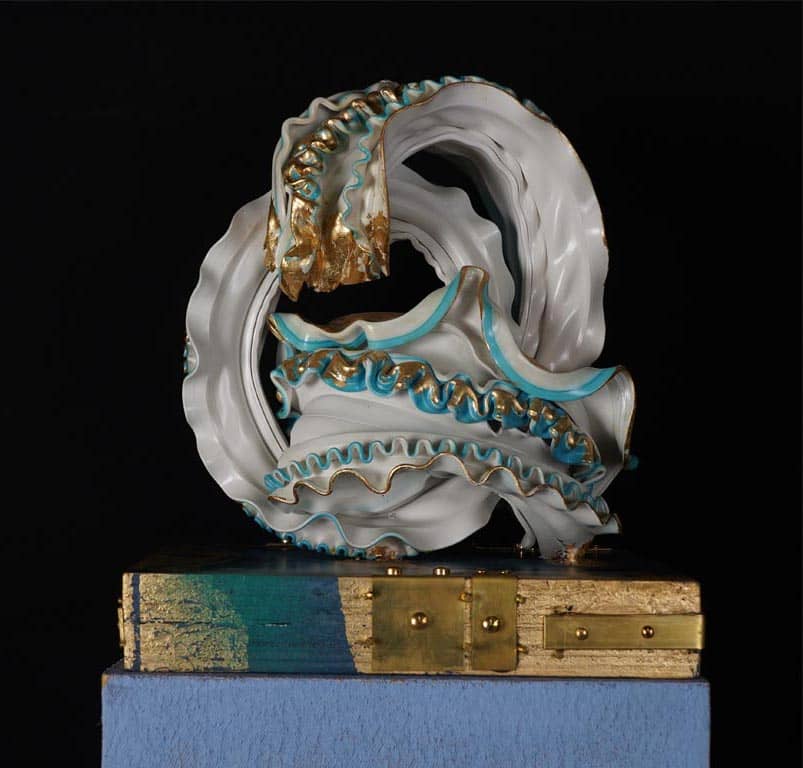 Lin Shih Pao is a New York contemporary artist born in Pingtung County, Taiwan. A child from the rural countryside of Taiwan, he has been creating with his hands since he was young. And his hand-making skill has led to this extraordinary life as a legendary artist in a social movement. Taiwan’s Times Press compiled his story into two books:” A Penny Story” and “The Legend Continues.” Taiwan’s public television also produced an episode for him: An Artist’s Story.

You may be as curious as I am, how his work resulted in a thousand-person social movement? How he demonstrates love in interpersonal relationships has brought tears to the eyes of many, both participants in his creation and viewers. And his volunteers rally to him with exuberance and passion. Let us hear his views on art creation from the following interview.

Who are your most admired artists?

I like Van Gogh’s wild, enthusiastic, and reckless personality. I think that’s the spirit that an artist should have, regardless of the consequences to make art, live in the moment, and do whatever you want to do at the moment for the art’s sake. I have visited the painting site of Van Gogh in the south of France, and I can feel the momentum. In addition, I also like Picasso’s willful little urchin personality, but Picasso is very good at doing art business. Unlike Van Gogh, Picasso’s life is the sum of reason and sensibility. As for American artists, I like Jackson Pollock. His action painting in Abstract Expressionism has an invisible coincidence with my painting creation. I often use a similar technique as he does to flick paint on the canvas. The bottom layer presents layers of motion like blood vessels and then covers it with layers of paint as if the skin covers the blood vessels. When the last layer is covered, the surface seems to be covered and the bottom layer is invisible. If you look closely, the faint traces are revealed naturally, showing traces of life like blood vessels flowing. My previous works were full of colors, but now the colors are more and more simplified.

Tell me about how you became an artist?

I have had a wild imagination since I was a child. Because of the lack of resources in the countryside, I made toys with the natural materials around me. Later, after taking art classes at school, I learned it was my calling in life. I studied commercial art in vocational high school. And because I won many national awards during my studies, I was recommended to go to university. However, I didn’t want to be bound by the academic art practice. So I gave up the opportunity to go to university and went to Army instead. After being discharged from the Army, I went to Japan to study Japanese glue painting (Nihonga) and learned about three-dimensional modeling design. I lived in Japan for eight years. During this time, I won three “Grand Prix Exhibition” awards in Paris. This gave me the courage to move to New York and become a graduate student at New York University. I had wanted to visit this epicenter of contemporary art for two years, but I never expected to stay for more than 20 years.

Talk about how you turned your art into the legendary social movement?

After engaging in artistic creation, I understand that the feeling of beauty is not necessarily something that can be seen with the eyes. I ask myself if the feeling of beauty can only be understood in the heart, how can thousands of people feel it simultaneously? So I designed the art of mother’s love by asking mothers to donate the pacifiers used by their babies. With the effort of many volunteers, I received 200,000 used pacifiers. I used them to make a Christmas tree, where they were displayed in a public art venue for thousands to view.

Another example is tens of thousands of recycled plastic bottles action art, named “Love Tree.” I tried to express the need for more love and tolerance in society to care for those who rely on picking up plastic bottles to make a living. After the exhibition ended, I sold all the recycling bottles from the artwork. I used this money to help disadvantaged groups. In addition, because of the spiritual meaning behind these works, I persuaded many volunteers to participate in these thousand-person campaigns.

Is it material that inspires and/or influences your art creation?

Life and art go hand in hand every day, so you will discover new materials and find new inspirations every day. Take my example in the Crystal Window & Door Systems, Ltd. where I was the first “artist in residence” in the factory. Speaking in general, artists and factory workers seem to be two different states. However, from ancient times, art has co-existed with the various classes of human existence. Art is classless despite modern attempts to divide art into cultural classes. The impression of laborers will assume the world of the artist is different from their world. When I entered the window factory to live among them using their recycled window scraps to create, our worlds come together. Our world is new because of the material we shared. It changes the viewpoint. My new “Golden Age” series is made of recycled waste PVC window frames from factory window scrape materials. The inspiration is that every moment in a person’s life is a golden age, so cherish every moment. During the 60 days of living in the factory, the constant changes of the newly discovered materials have continued to inspire my new thinking and creativity. For example, the PVC window frame becomes a curved shape after being heated at a high temperature. Then I quickly put it into the pre-made wooden circular mold; it became a circular and streamlined sculpture I called “the engagement ring.” It symbolizes enthusiasm, unrestrained flow, and harmony, like the combination of yin and yang. When it comes out, the PVC window pipes will naturally appear blue or red color after heating. I then stick gold foil paper on it, like gold on a ring. These works will be exhibited at Artexpo New York 2022 in early April.

What are the most memorable things in your artistic career?

Another example is that I want to recycle tens of thousands of battered baseballs to make a sculpture of “Tree of Peace” to represent the teamwork of baseball players sweating and never giving up. In the end, more than 800 teams from more than 40 countries donated their battered baseballs, and there were 25,000 balls. The most touching volunteer was an old Japanese grandma who told this incredible story. I had only collected a few hundred balls in the first five months and seemed to be at a dead end. When everyone was about to give up, the old Japanese lady declared that everyone should learn from the spirit of athletes not giving up. She could not type, so she handwrote a few lines of advertisements and paid 7-Eleven to make hundreds of copies. As long as a school with a baseball team in Nagoya, the copy would be distributed, and a few balls will be collected. She has also traveled to many schools to meet with coaches. As a result, everyone discussed this matter during the school-to-school baseball games. She played a big part in creating a consensus, and that worked to complete this ball accumulation mission with the assistance of the World Baseball League.

What advice would you give your younger self, and what are your following plans?

When I was young, I was more self-conscious and stubborn, and I lost some friends because of my supposed clear distinction between black and white. Now I have aged, I look at life with an open and tolerant attitude. So I would tell my younger self to challenge more, try more, and learn more. In the future, I would love to make a movie about the story of my art-making experience, including especially those who helped me. I heard the saying, “life is like a play, and a play is like life.” I think the movie will tell all. However, the artistic creation of filmmaking requires too much money and a lot of talent sponsorship. I would consider barter or sell my artwork to get a movie collaboration so that these touching stories in my life can become movies.

To learn more about Lin and his work, please visit www.lin-shihpao.com.