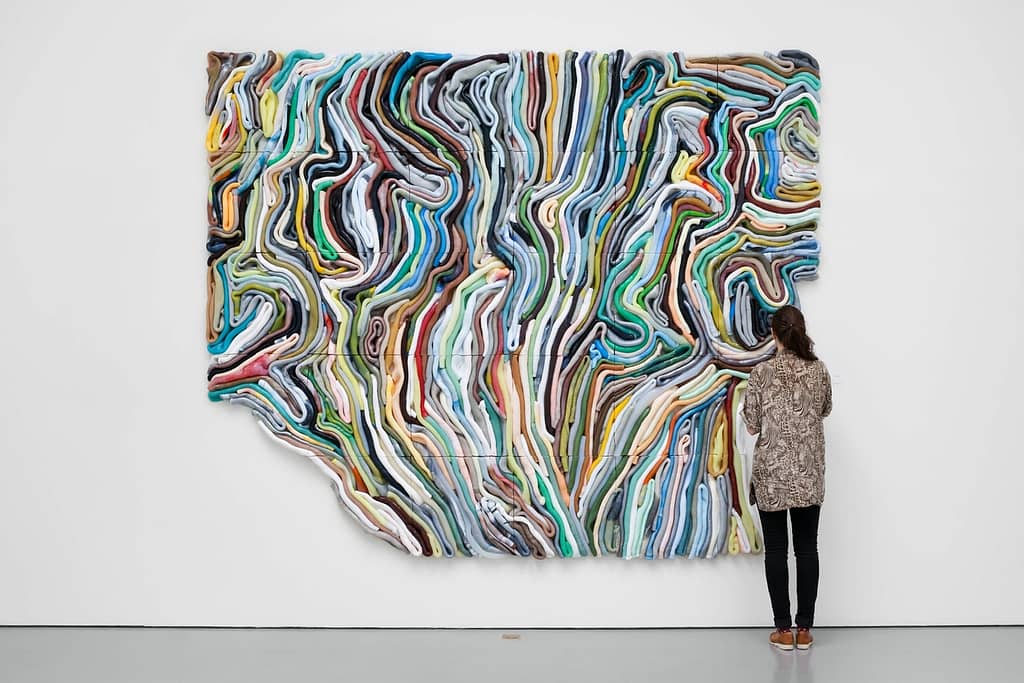 Matthias van Arkel has become known for his unique expression of merging painting and sculpture in his works made of silicone. Over the past few decades van Arkel has consequently investigated painterly ideas, his practice has emerged out of a conceptual approach. In his three-dimensional works meaning is achieved through density, sensuality and energy. There is a performative dimension involved in the creation process, as the artist balances intuition versus control through the special technique that he has developed. The sculptural shapes move like enlarged brush strokes forming abstract landscapes. Van Arkel challenges our perception of what defines a painting and invites us to see it from a new perspective.

That’s a difficult question. Probably Edvard Munch. I’m so interested in everything about him as an artist and a person–how he found ideas for his paintings. His graphic prints, especially, have a very strong impact on me.

It all started because it was natural in my family: my father was an artist. But the one who took me further with the thought of being an artist was my 9th-grade art teacher, who inspired me in all ways and stood as a model for me after school hours. She also gave me pep talks about my ability to be an artist, that I had the talent for it, and she told me to apply to art school–my dad didn’t do that. He thought it was a difficult life to be an artist; he wanted me to choose something else. But this teacher encouraged me at that young age to go for it. I also had another teacher who lent out his studio with a fantastic view of all of Stockholm so I could paint there all summer. I would say these three people were very important to me. My dad is important to me anyway since he made it natural for me to actually live as an artist–as a job and not as a hobby. That was important since many people see art as a hobby. I eventually studied at the University of Arts, Crafts and Design (Konstfack) for 5 years, followed by two years at the Royal Swedish Academy of Fine Arts in Stockholm, and then I became a professional artist.

It’s so much. It’s other artists (their processes are interesting), seeing other artworks, interacting with life in a sensitive manner–I bring all those in my art in an abstract way as well as a strong expression of sorts of emotions. Relationships, both amorous or otherwise, also inspire me.

Well, for a start, the material, silicone, is very rare and it’s also a bit too much of everything. It’s too shiny, too big, too vigorous, too heavy. It’s too much in many ways, but I feel that I have a handle on it and make something very original from these ideas. It’s also not so sensitive at the same time. All other artworks you can’t touch. You can touch my art as they’re not fragile and quite brutal. The paintings consist of several sections or plates mounted as a whole. The process of making them with machines, assistants, and an oven – it’s a combination of method and concept.

It’s when I feel that it’s interesting and that I can sit and look at it for a long time not feel restlessness or an uncomfortable feeling within my body. I have to feel fascinated when I look at it myself.

It has more content, literally than before. I try to tell a story more than I’ve ever done before, even though I work in an abstract expression or language.

To the collector, apart from my artistic intention and what I’m experimenting with, I would like to say that the silicone material is the most durable rubber material in the world. It’s used for very extreme situations within industry. It’s a material that doesn’t move like other rubber materials do. It’s made out of sand and coal, and it’s not an oil product. Its high molecular density protects the pigment from the sun’s UV rays.

For curators, it’s good to know that my work has a different impact in a group show since it’s extremely tactile and is almost more like sculpture than painting, even though its built upon painterly ideas. It’s in the tension between the method and intuition that my work is made and comes to life.

The first was when Gallery Aronowitsch added me to their gallery in 1995 – that was an important gallery with whom I made seven exhibitions. It was one of the most important galleries in Sweden at the time. He introduced me to the American scene where they represented, among others, Donald Judd and Sol LeWitt.

The second highlight was when Lars Nittve, a very famous museum director, bought one of my first silicone pieces in 2003 called “Triple Combi”. He bought it for a collection at the Modern Museum in Stockholm.

Third, I made a significant public work in 2011 in Jakobsberg. This commission for the city’s public transport system (SL) opened up numerous opportunities for future public artworks.

Last but not least, when I met the architect Morris Adjmi and we started making projects together in New York city, among them, though not yet finalized, is a project on Broadway and Canal street where a whole building will be covered in metal plates cast from my art work.

This week, I’m participating in VOLTA Art Fair in NYC together with Inda Gallery. I will show several large works at the booth and I have several upcoming projects in the works.

Work as an assistant for a well-known artist for some time. You learn a whole lot from that which you wouldn’t otherwise in other environments.

To learn more about Matthias and his work, please visit www.MatthiasVanArkel.com.