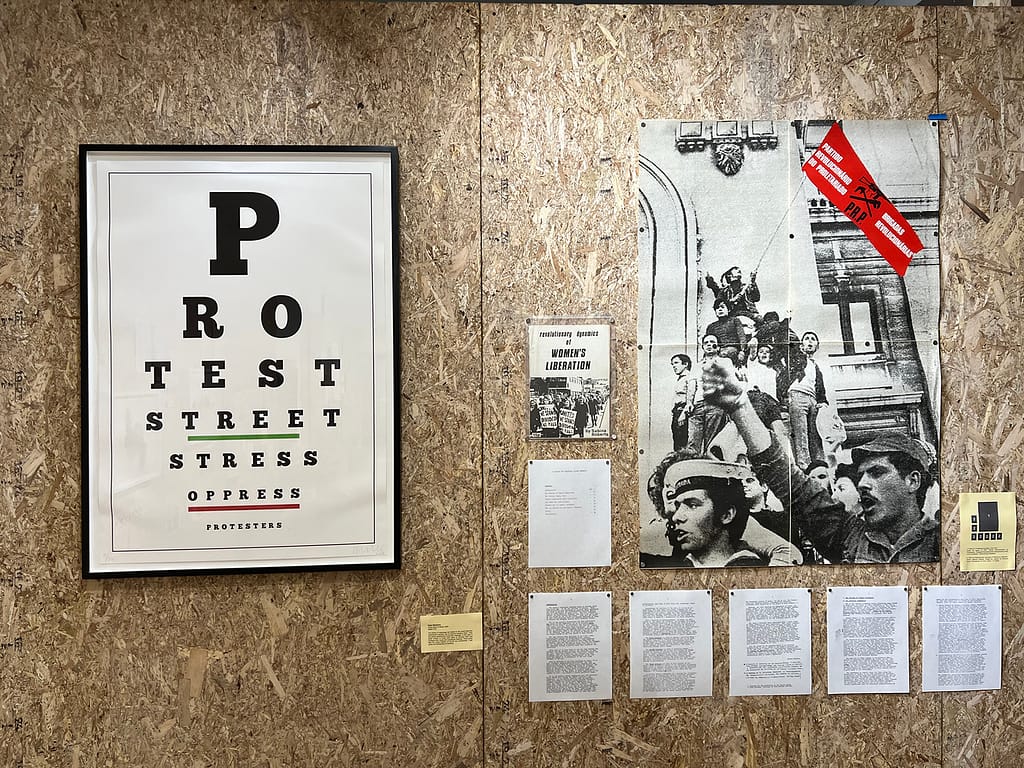 For the second exhibition at its new East Village venue, WhiteBox showcased “JMA Matriarchive In Resistance”, a complex interactive project curated by Yohanna M. Roa; an  exhibition doubling up as the premiere worldwide activation of the Mexican-Lebanese pioneer ecofeminist architect Josefina Mena’s archive reconsidered within the contemporary paradigm of New York’s present-day artistic, cultural, environmental, and socio-political scene. This proposal constitutes the seventh chapter in the EXODUS Series celebrating émigré artists in New York City. Questioning the ‘use’ of the archive and of its memory, a select number of key documents going back to the 1967-76 period, from the Mexican-Lebanese pioneer ecofeminist architect Josefina Mena’s Matriarchive were activated by contemporary NYC based immigrant artists.  The task at hand for each artist was to respond and react to Mena’s works from the present day, each availed of its own experience. As fodder, the curator-archivist Roa selected works from a network of collaborative actions Mena did in various localities, in this instance concentrated in Portugal, Mexico, Chile and London.

What do we see in an Matriarchive? It is not the inert evidence of an individual event arranged on those classic chipboard walls that serve the documentary purposes so well; the dialectic and multiple relationships between forces, bodies, and threads of different histories interweaved. At least, that is what we see in a living, open archive such as in this one. In her lecture for the opening of the exhibition, Ángeles Donoso Macaya recalled Ariella Azoulay’s challenging ideas about revolutionizing the archive: the Matriarchive as a feminist practice that defies the ways documents should be presented and made accessible to the public.

One of the artist’s activations, Jorge Lozano’s That’s me (Esa Soy Yo), was a video displaying pairs of photos shot during the Carnation Revolution in Portugal by Josefina Mena. In the middle of the piece, we hear Josefina recognizing the friend’s faces and people in the streets during the protests of those days. The archive activates the memory: at the end of the video, Josefina’s voice sounds astonished to recognize her face; a second after, her face has been mingled with others, and the video ends in a documentary gesture of commitment and community engagement that turns our attention to the present.

The renowned Koen Wessing’s photographs, taken in Chile in 1973 before and after Augusto Pinochet’s coup d’état, are another example of the afterlife of documents: those images that represent the final days of the Popular Unity Government and the beginning of a brutal seventeen-year dictatorship are not the merely register or reproduction of a political landscape; those images become posters designed by Mena as part of an emerging network of international solidarity against the violation to Human Rights. The exhibition gathered the original photographs along with posters, and some were open to the public for close and tactile examination. On the same wall, the artist Claudia Baez recreated some of Wessing’s photographs taken some years later in Nicaragua, but using oil on canvas: like the colorized memory of an event, the souvenir that we have in front of us is new, an open wound that is currently in the archive.

Two other very different pieces that tell their own stories are the first edition of Cecilia Vicuña’s book Sabor a mí (Taste Of Me)  (1973) edited in England for the legendary Beau Geste Press, directed by Felipe Erhenberg and David Major, as well as the experimental sketches and models that Josefina used for a contest organized by Salvador Allende as a “pilot for a project for urban redevelopment in the center of Santiago”. Although that project did not win and consequently never was built; in 1975, in Portugal Mena, Bob Kindred, Graham Caine and Keith Cowling Lynne Bailey (while taking care of two young children remained in charge of all the extensive household support needed to make this project achieve its goals) designed a solar-powered hot shower prototype that was built collectively in the same manner that the care and domestic chores were shared, in an excellent example of how an incipient ecofeminist architectural project is intermingled with a more obvious approach to collaborative and political practices, that go in opposite directions from the traditional economy of caring and production.

Part of the revolutionary force working in the archive that Azoulay links with the “archive fever” is related to “numerous individual initiatives for creating new archives and claiming the right to re-arrange and use existing ones”. This rearrangement includes drawing the lines that have faded: in 1970, Josefina Mena and Gustav Metzger (developer of the Auto-Destructive Art concept) worked together on the project “Mobile”, which consisted in touring the streets of London in a car that had connected the exhaust pipe with a sealed transparent acrylic box with plants consuming the dioxide; they also talked with people about environmental problems and kept a record of the food contained in the box. Although Mena’s name is not found in catalogs that mentioned this action, and Metzger remake the piece in 2015 in México city, here we can see some photographs from the original.

Besides what I already have mentioned, the Mena Matriachive includes pieces from the ‘Radical Technology’ collective in England, Maurice Wilkins (Nobel Prize for Physiology or Medicine, 1962), the MIR in Chile (Movement of the Revolutionary Left); also, the exhibition presents works by other artists like Ivan Navarro and Courtney Smith, Mike Hoolboom, Lilia Ziamou, Sa’dia Rehman, María Evelia Marmolejo, Roland Gebhardt, and Tania Andrade Olea.

It is clear to any attentive spectator the reason why curator Yohanna M. Roa decided to include Fuentes Rojas’ “Collective Days of Embroidery” as a metaphor of the interwoven materialities and engaged social practices of resistance: global and local cartography of femicide and violence against women on a black background is traced with colored threads; the large black cloth showing political borders have the slogan ‘¡Ni una más! / ¡Ni una menos! Una voz de hilo y aguja que no se calla’ (Not one more / Not one less. A needle-and-thread voice that doesn’t shut up). The collective voice of this archive is composed of so many individual voices to face up to that structural patriarchal and brutal violence that lives in the borders where people’s bodies struggle to survive.

What an archive fever has yet to offer is to revolutionize its presumptions, like what Anne Cvetkovich calls the elaboration of an archive of feelings or what have been considered disruptive or anticolonial archives (Donoso, Azoulay, Stoler), using dialectic strategies (Berrebi), or in which the power of imagination, as Florian Schneider highlights as constitutive to the Matriarchive, would be the main force that allows archivists, artists and public to interact with each other and imagine our present times.