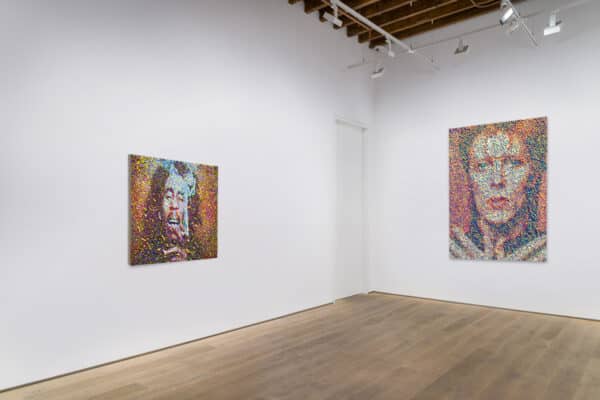 In his first virtual solo exhibition taking place at Robert Berry Gallery, Chicago-based artist John Ruby has appropriated imagery of the world’s most iconic musicians, and puts a renewed importance on the rock-and-roll side of Pop Art.

For his new body of work, Ruby is creating digital recontextualizations of famous images of John Lennon, Bob Marley, Amy Winehouse, Jimi Hendrix, Jim Morrison, Janis Joplin, David Bowie, and other late greats.  Ruby’s inspiration behind the rock and roll motif seems to be one from the vantage point of an artist who clearly loves music.  Many artists listen to classical music when creating, but this artist clearly loves the electric guitar and all the culture surrounding it.   Every music fan has their idols, and Ruby certainly was inspired by what he grew up with in the 70s and 80s.

The show is the first online only show at Robert Berry Gallery, which seems to be the new trend in the art world given the current state of the COVID-19 pandemic, and virtual exhibitions are quite a step forward over the already stale “viewing room” that have been making their way into the online strategies of other dealers.  Not having physical limitations allows Ruby to exhibit these fantastic new paintings during a time when collectors are craving new works to fill up all their free time between Zoom calls and emails.

Virtual only might be a concern for some, but what is very apparent from the detailed images and video clips uploaded onto the gallery site, is the deep textured surfaces which look to be colored string woven across the surface of the canvas. One can clearly see that there is a handmade painted acrylic impasto as the structural foundation of the works.

These paintings are based on existing portraits, but from the incredible level of digital manipulation and advanced understanding color theory and 3D printing, the portraits Ruby has created start to become something else.  The artist emphasizes that there is more to his use of these rock icons, and that as you step closer to the painting, they become entirely abstract.  He intends that this is how it would be when trying to get close to any celebrity, as the closer you get, the more complex the actual figure would be.

With a proliferation of galleries increasingly turning to online viewing rooms, and AR spaces, this new gallery’s strategy of creating virtual exhibitions is a breath of fresh air in a saturated online art market.  There is complexity of viewing digitally-based works in a virtual setting, but Ruby’s vision and understanding of the digital world are apparent.  There is clearly a technical mastery in these works as the artist has been utilizing new technologies since the late 80s.  There appears to be both real and imaginary works in this exhibition, but the balance of the two worlds seem to replicate the ever-increasing dependence on our phones and computers to seek out something that feels as important as seeing artworks in person and having real world social interactions.  The amount of future opportunities seems to be vast with what an artist like Ruby can do both real and digital.

The comparison to Andy Warhol’s portraits of John Lennon, Debbie Harry, or Mick Jagger seems easy to make, but unlike Warhol, Ruby is hand-painting each work, and there is only one work from each photograph created, which adds a significance to each canvas.  Reference to Adrian Ghenie’s blurred abstract faces seems to be present, as are Francis Bacon’s traumatized humanity in these portraits of troubled rock icons we lost too soon.  Unlike Jacques Louis David’s paintings of death, or Damien Hirt’s shark tank questioning our uncertainty and fear of death, Ruby’s intent is clearly celebratory of the life of the figure’s lives, not a memorial of their death.  The comparison to Warhol’s positivity is one that is relevant and proper.