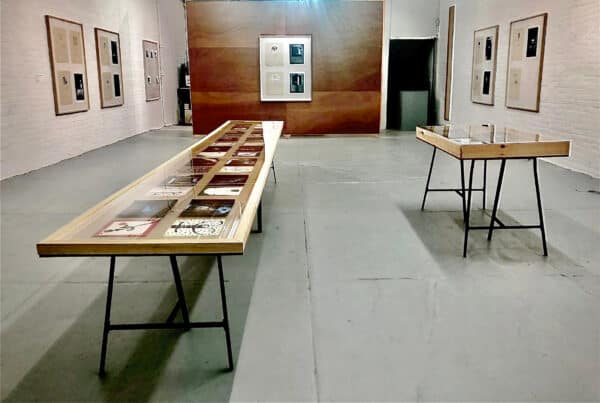 A Resource of Imagination

In the collaborative exhibition titled “Nocturnal Whispers of Pan” presented at WhiteBox Harlem, Thomas Rose and Lo Ch’ing have teamed up once again to offer the public an exciting new exhibition open from June 12th through July 17th, 2020.

On February 8th preceding the official announcement of the Coronavirus pandemic affecting New York City, WhiteBox Harlem opened “Trapped in Wuhan“, premiering the first known video work by Wuhan based artist Ke Ming offering an in depth, in-situ arresting graphic examination of the novel virus’s destructive plague-like effects​ in his human environment occurring as early as mid-January. In the tradition of WhiteBox programming responding to the tenor of the times, the next two exhibitions under COVID-19 confinement preceding the present, meta-poetic show “Nocturnal Whispers of Pan”, were dedicated to the exodus experienced by Chinese and Mexican èmigrè artists in New York City, both shows celebrated those artists’ positive contributions to its unparalleled art scene as whimsical immigrants, showcased in the present day and age of Trump’s antagonistic policies.

“Nocturnal Whispers of Pan” meets this criteria acting as an ‘analgesic’ to counter today’s xenophobic times while doubling up as celebration of East-West artistic and cultural ties lost in the ether of either the political or the economic Sino-American unending confrontations.

Succinctly elaborated by two aesthetic masters in deep conversation, Minneapolis based sculptor Thomas Rose​ sculptor,​ and ​Taiwanese poet-painter scholar ​Lo Ch’ing, the exhibition presents two main opus, Nocturnal and Secrets, laid out in a format akin to the great ‘Illustrated Medieval Books’ where the visitor is solicited to enter the collaborative pages as if in a ‘stage’ where exquisite dual visual and literary narratives appear to invite the viewer to, in a Duchampian way, finish the works.

The literary-visual narrative in Nocturnal Whispers of Pan befits New York audiences’ confinement situation to the T, the annals visually framed within a ‘House-Home’ construct. It is in part a sequel to the older ‘third’ solo book by Thomas Rose titled 1018 W Scott Street (2005) exhibited in the anteroom investigating Rose’s roots. Penned by Arthur Danto, this book depicts the artist’s birthplace house in Minneapolis, defining home and space through the use of Rose’s innate philosophical tone exploring ‘lived’ architectural fragments and the ambiguities of space and place that represent time and its defining experience in material form.

The basis for this collaborative exhibition composed of two books, Secrets and Nocturnal Whispers of Pan is contained in Rose’s poetic attitude towards art, “It is also a firm belief of mine that the silence of a Morandi’s still life, a mountain landscape by Fan Kuan, or a composition by Avro Pärt in their poetic beauty, comprise all that is essential in the arts, it is the ineffable magic and poetry that sustains us.” Additionally, Rose mentions factors that greatly influenced him, “My reading on religion and the embedded traditions of mysticism drew me to ‘architecture as container’.” These arcane, pursued spiritual manifestations hold many of his ekphrastic ideas, a brilliant merging of material and poetic narration.”

Sculptor Richard Serra stated, “work comes out of work”. We see Rose applying this dictum in his treatment of 1018 W. Scott Street. Various photographs included in ‘1018’ depicting Rose’s early mystical elements implied in the burning of various chemicals over a bed of sorcerous geometrical renderings open a window into his anthropomorphic architectural spaces. Some of the same images eventually filter into the pages of ‘Secrets’ ending teased by Lo Ch’ing’s responsive meta-poetic text and brushwork.

Lo Ch’ing and Thomas Rose met each other in 2010 via Joseph Allen, a renown China Scholar. Their encounter created a fruitful work in “Secrets” (2012), a group of 8 photographic constructed images by Rose accompanied by Ch’ing’s responsive poems and calligraphy, handprinted in English on Arches paper and in Chinese on the finest rice paper. Rose firmly believes it is in the nature of his art not to offer answers, but questions, thus, in response to this ‘ambiguous’ component in a work imbued with illusional center images inspired by Pepper’s Ghost technique in the theatre, Lo Ch’ing reacted by adopting real as well as invented, un-existing Chinese characters, some out of harmony with Rose’s images, others in contrast, yet always maintaining proper tension in their reverent dialogues.

Combined with Ch’ing’s pithy poems, these works acquire a unique perspective arriving from the East, all the while contrasting to Rose’s works in Secrets, a work soaked in the Western ‘Medieval tradition of the devotional book of Hours’, a meditation of time and place through depicted materiality. With regards to the expressing/reading of poems, Ch’ing says, “Reading itself is the combination of submissive-reading and vigorous misreading.”

As a foil, in their most recent book Nocturnal Whispers of Pan, Rose used thirteen printed photographs of murals shot by him at The Villa of The Mysteries, Pompeii. Subsequently, he pondered various thoughts surrounding ‘object or thing’ distilled from Hagel’s thoughts on the phenomenology of things. Rose says, “The thing is the thing, and yet the thing, candle, light bulb, door, house, tree, as experienced, carries content, not in itself, but in relationship to one’s own experience”. He tries very hard to name or explain but it remains out of reach because it is not the Thing, but the shadow of the thing. For this task the artists referenced books related to space and place, in particular The Transfiguration of the Commonplace by Arthur Danto, alongside others by Jorge Luis Borges, Gaston Bachelard, Italo Calvino, Cao Xueqin, and Sei Shōnagon.

In front of a recreated set surrounded by a miniaturized Pompeian Mural sits a skeleton doll-house as center piece or fixed point for the narrative, a solemn structure fabricated out of welded, brushed raw steel. In its interior Rose positions a delicate female doll adopting various roles and moods ranging from awed, erotic, distraught, reflexive…ringed by basic bedroom furniture effects placed at times orderly, otherwise disheveled, all familiar elements unchanged since Roman times. Bed or chair, cup, book, all those bedroom elements are caught by the lens and ‘released’ in the final ‘staged’ photographic print. Lo Ch’ing, on his abutting rice paper responds to each of Rose’s 13 photographic montage works with his own rhetorical visual equations spewed in brushed black Sumi and colored inks, using real or invented pictograms. The Book cover is a masterpiece made out of a deep rectangular box, its interior holding the indexes in its pit. When the three flap covers depicting an eerie B&W forest with rising full moon open 90 degrees vertically, it forms a theatrical stage worth of Waiting for Godot.

Rose and Ch’ing firmly retain their own well-defined styles and differences through and through. While Rose uses strict materials and defined light sources in composing the narrative for the final photograph, Lo Ch’ing employs effectively Chinese characters, which are in reality, canny, non-existing pictograms containing meanings innate to themselves yet thematically and spatially fine tuned to Rose’s layouts. Upon a last look, the works reveal themselves to the viewer full of a particular ‘ambiguity’ forged by the artists in hopes to elicit in the viewer a latent curiosity, a questioning that may guide her/him to ‘conclude’ the work.

Altogether, the three books become a single experience of the mysteries enunciated in the ‘House and Home’ of our own imaginary under confinement, a throwback perhaps to earlier times when perusing books provided humanity with building its own viewing screen close to the heart, an experience today by and large succumbed to the pixelated window.

Accompanying the exhibition, Thomas Rose projects a succinct film titled A+B bringing us into the private world, home and writing quarters-as-laboratory of his dear friend and colleague Arthur Danto and his wife Barbara Westman.