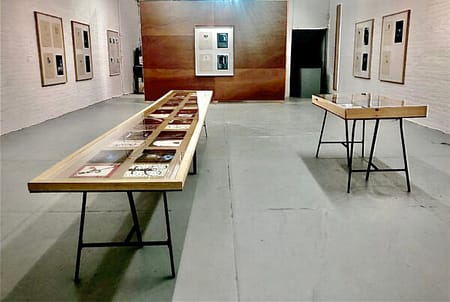 A Resource of Imagination

In the collaborative exhibition titled “Nocturnal Whispers of Pan” presented at WhiteBox Harlem, Thomas Rose and Lo Ch’ing have teamed up once again to offer the public an exciting new exhibition open from June 12th through July 17th, 2020.

On February 8th preceding the official announcement of the Coronavirus pandemic affecting New York City, WhiteBox Harlem opened “Trapped in Wuhan“, premiering the first known video work by Wuhan based artist Ke Ming offering an in depth, in-situ arresting graphic examination of the novel virus’s destructive plague-like effects​ in his human environment occurring as early as mid-January. In the tradition of WhiteBox programming responding to the tenor of the times, the next two exhibitions under COVID-19 confinement preceding the present, meta-poetic show “Nocturnal Whispers of Pan”, were dedicated to the exodus experienced by Chinese and Mexican èmigrè artists in New York City, both shows celebrated those artists’ positive contributions to its unparalleled art scene as whimsical immigrants, showcased in the present day and age of Trump’s antagonistic policies.

“Nocturnal Whispers of Pan” meets this criteria acting as an ‘analgesic’ to counter today’s xenophobic times while doubling up as celebration of East-West artistic and cultural ties lost in the ether of either the political or the economic Sino-American unending confrontations.

Succinctly elaborated by two aesthetic masters in deep conversation, Minneapolis based sculptor Thomas Rose​ sculptor,​ and ​Taiwanese poet-painter scholar ​Lo Ch’ing, the exhibition presents two main opus, Nocturnal and Secrets, laid out in a format akin to the great ‘Illustrated Medieval Books’ where the visitor is solicited to enter the collaborative pages as if in a ‘stage’ where exquisite dual visual and literary narratives appear to invite the viewer to, in a Duchampian way, finish the works.