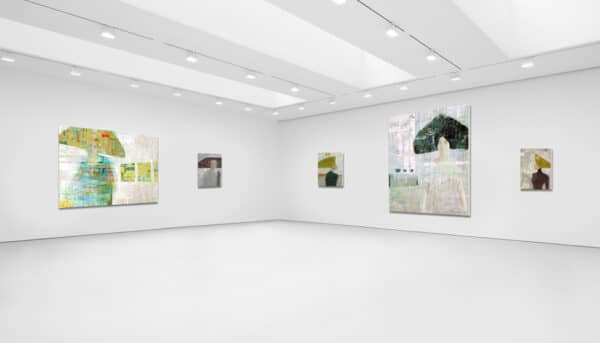 The Duality of Ned Martin

Ned Martin created a dual style presentation that features both sides of his personality in “Spirits Through Time,” his second solo exhibition with Robert Berry Gallery, and challenges the viewer to contemplate the notion of time, the balance of humanity, and to reflect on the state of the world in these 15 new works mostly painted in the past few months during his unexpected quarantine in South America.

There are two parts to the show: the abstracted landscapes that Martin has been working on over the last few years, and the new portrait paintings combining elements of abstraction and figuration. To anyone who has been following the artist over the last four decades, you’ll know that he was classically trained at the Schuler School of Fine Art, and to this day still mixes his own colors and always builds his own painting surfaces to ensure that he has full control over every element that goes into his work.

For the last few years, he has used reclaimed aluminum printing plates on which to create his landscape works. The metal plates were originally used to print tabloid stories and advertising, which tend to be disposed after a few uses since there are remnants of images and text. The artists states that, “All of that imagery, paired with the landscape work, creates a sense of beauty mixed with commercial messages.” It’s the juxtaposition of the natural beauty of the landscape imagery that is combined with consumerism which is the driving force behind a lot of Americans that creates such a powerful dynamic. Martin also discusses his background of living in rural Pennsylvania on a farm, and his recent passion for camping, which has changed how he relates to nature compared to his en plein air days.

The harmony of the landscape works also comes from the balance of the bold and colorful Henri Matisse, or even the newer, distinctive Yayoi Kusama—inspired patterns and rhythms, along with the more photorealist trees, bark, and even animals. Martin calls this juxtaposition abstracted photorealism. The works are colorful, elaborate, and have a number of layers of cut aluminum creating multiple planes creating a greater pictorial depth than previous works in the series.

The photorealist figuration with abstracted backgrounds came from his unexpected quarantine in Bolivia where a one-week vacation turned into the artist not being able to return to the US for almost six months. After finding brushes, oils, and pigments at various stores around town, there was still the challenge of creating a surface to paint on. While working in a small studio that was formerly an apartment building, there was some old cabinetry that was going to be thrown out. The small wooden panels solved two problems; the first of finding a suitable flat surface, and the size happened to be exactly the size of his sole carryon bag that he flew into the country with.

Living and working in a new country is always a challenge, and Martin was thrown right into the fire by having to create under such strange circumstances and not knowing the language well. The small-sized figurative paintings would be able to be carried home or shipped if absolutely necessary in time for the show. “Spirits Through Time” seems to relate to a lot of things. The obvious are the references to classical 19th century portraiture poses, and the stylized Egyptian elements including gold hues, jewelry, and headpieces.

Duality is a running theme in the figurative works as well. The carefully painted photorealist faces compete with the abstracted clothing, fabric patterns, and gridded backgrounds. In Martin’s previous solo show with Robert Berry Gallery, the artist featured new abstracted grid paintings on the aluminum printing plates, and now he is using the abstract as a ground to place elaborate modern and classical representations of women. The almost Gerhard Richter palette knife smears of paint created a solid yet neutral foundation, and allows for the figures to shine independently. Time stands still in these works, while simultaneously moving both forward and backwards. In his personal life, he’s continuously torn between his love for both urban and rural environments. Living in New York is one side of his personality, while being in nature is the other, in a yin-yang harmony.

Martin is no stranger to the struggles of humanity, and the spirits evoked in the exhibition are meant to be a personification of the powerful women he has loved and lost. The haunting effect of grief and hopelessness, especially in the midst of a global pandemic with over a million dead in under a year, are acknowledged but he understands that life must move forward for everyone to heal despite their personal challenges. His figures aim to bring hope and serenity to the world; as much an act of remembrance as an enduring validation to the importance of those who were most important to him.

Through both sides of the show, there are constant dualities that Martin is able to bring into perfect harmony. The connection between the two sides is where his work shines. Some of the juxtapositions include abstraction versus naturalism, with the juxtaposition in the landscape works, abstraction versus figurative in the figurative paintings, flat paint versus textured throughout the show with raised Japanese style chop marks and multiple layers of aluminum plates, modern versus classical, modern versus contemporary, and man versus nature. Spending time with each of these works is certainly a pleasurable experience, and as you spend more time with them, you will start to understand the complex relationships and dynamics that comprise each one. Understanding this will lead you to understand who Ned Martin the man is, and what Ned Martin the artist has to offer the world through his work.

The virtual exhibition takes place at www.RobertBerryGallery.com and is on view through November 29th, 2020. As the gallery business is not presently open to the public, gallery shows have become more interesting and surprising with one-of-a-kind new works in new settings. Martin’s works shine brightly in their current virtual installation, and would make a wonderful addition to any real life corporate or personal collection. Make sure to click “buy” in this transformative virtual show.