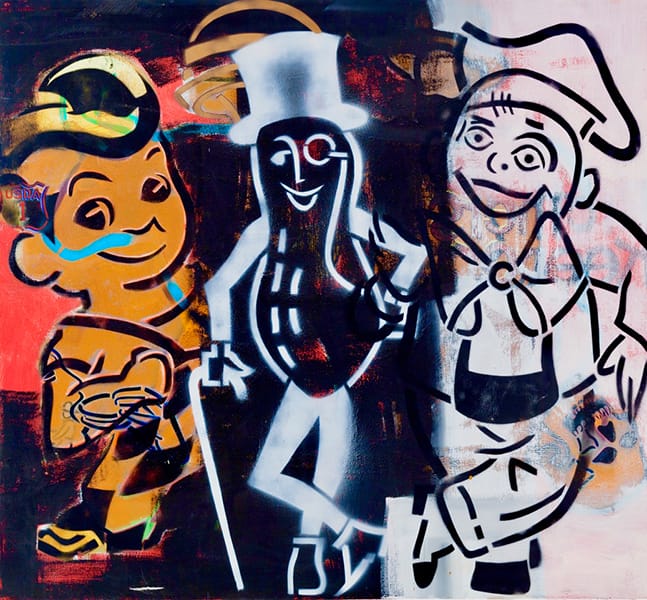 For more than 40 years, Michael Netter has been religiously creating video art, paintings and assemblages. A self-taught artist, he became a protégé of Andy Warhol, fully immersed in the dynamic art world of New York in the early 1970s. He is represented by ACA Galleries in New York.

I was always an artist in a sense; always loved art and saw it as a calling. I guess that’s kind of a standard answer, but I’m mostly self-taught.  As I reflect more on the question, I would say it was to put my creative self to work.  That I want to manifest my ideas in a lasting form of communication in a more conceptual and less literal manner than through words.

It’s magical – a piece feels unfinished until, with that one stroke, it’s all of a sudden finished. That can take 2 days or 10 years. I feel all work has the possibility of being good, you just must keep working at it.  In fact, sometimes I have felt like gessoing over a painting that I can’t see any potential in only to finally discover a path that works much later on. This might happen in the last 5% of effort on a work.

I try to resist being influenced by other artists although I might see some dimension of their art that gives me an idea.  Some art influences/inspirations are – early Italian Renaissance painters like Cimabue, Fra Angelico, etc. because they are about icons and are relatively primitive; Paul Klee because much of the time he works with stylized symbols and language; Stuart Davis because he deals with beautifully drawn commercial objects/brands in an “all-over” composition, and Warhol with his stripped-down repetition.

With the new works using mascots, I’m reaching into a previous career as a corporate consultant working on branding and marketing for Coca-Cola, Kraft, American Express and many others.  So I had a deep interest and an up-close-and-personal engagement with big corporate America that gives me insight into what they wanted to say and show the world.

What is different about your current body of work from previous work?

My process is similar to what I’ve been doing for a long time with stencils, spray and hand painting, dense and all-over compositions, lots of texture.  In the past I’ve used very common images like numbers and letters or household objects, but now I’m using specific commercial images – Tony The Tiger, Mr. Peanut, Fresh-up Freddy (7-up), Silly (rabbit avatar of Trix cereal) and others.

That’s in the eye of the beholder.  In making my art I always step back and ask myself if it feels derivative in any way.  If it does, I change it until it doesn’t.

What makes my work different is that while I use iconic commercial logos and mascots that are created for mass marketing and are slick, I am stripping them to their basic imagery which I then randomly recreate with hand-made stencils making the image not as precious. The works are more about composition than the recognition or meaning that businesses wanted them to have.  Artists are always using logos or pop culture as protest or appropriation or making their work just as slick as commentary, while my work is unmannered, denotative, vernacular, and impersonal.

I was fortunate enough early in my career to be Andy Warhol’s videographer. That allowed me to spend a lot of time with him, other artists, art collectors, fashion designers, and a horde of original, creative characters who hung out in The Factory or with him socially. The three years I spent with Andy provided “decades” of experiences including having my videos, “The Factory Diaries”, permanently installed at the Warhol Museum in Pittsburgh and featured in Warhol’s retrospective at The Whitney.

Having my work featured in the windows of Bonwit Teller on 5th Avenue.  Back in the day, it was a big deal since they displayed Jasper Johns, Robert Rauschenberg, Dali and many other known or up-and-coming artists.

After many years of not exhibiting, having my solo exhibit “Cryptographics” at ACA Galleries in 2016 was major.  It was amazing to be in a gallery started in 1932 that has represented some of the most significant artists of our times.

Last year I was included in “Mortality” at the Katzen Art Center with the American University, curated by Robert Curcio and Donald Kuspit.  This exhibit with several other group shows I was going to be in were cancelled/postponed because of the pandemic.  However, luckily, I’ve managed to continue to sell work to new collectors who have been sent to me by past collectors.

Make art because you love/need to and not to get famous or rich. You need to work relentlessly to make your own work better and original. It’s good to see what’s happening in the galleries, online and other places, but you have to find inspiration from different sources other than current or recognized artists.

To learn more about Michael and see his work, please visit www.MNetter.com.