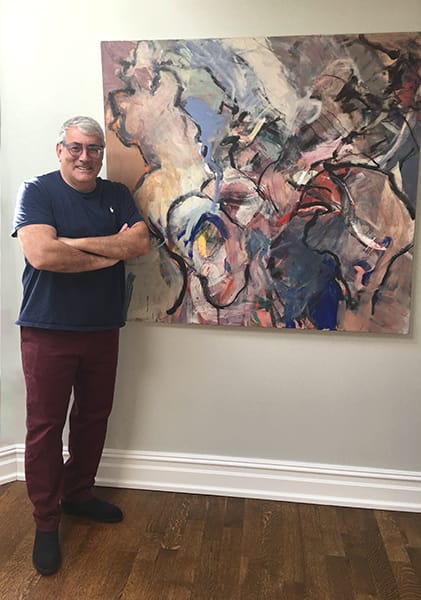 Art Review City speaks with New York dealer Howard Shapiro about opening his gallery, some of his success stories, and his unique approach to the business of art.

“My dream was always to open an art gallery. No other business would allow me to be surrounded by beauty and help artists get the recognition that they deserve.”

Howard Shapiro spent over two decades as a consumer finance expert on Wall Street at firms including Goldman Sachs and JP Morgan, so his friends and family were surprised when he decided in 2009 to pivot his career by opening an art gallery. But it turned out to be a winning combination: he brought with him an acute understanding of business and finance, and quickly evolved from art startup to standout.

Art was always his passion, but he took a circuitous route to get there. After earning his bachelor’s degree in Comparative Literature and Art History at Yale in 1983, Shapiro was accepted into Yale’s PhD program in Art History, but his parents insisted that he choose a “real” career instead. Art was something nice to look at—and buy when he could afford it—but it wouldn’t support a family. Looking back, he acknowledges that his parents had a point. The art world would have to wait.

The Wall Street life was hectic, so when Shapiro and his wife Esther could afford to start buying for themselves, they originally sought artwork that was calm and soothing and began collecting American Impressionist works. The first work they purchased—and still own today—from a small outdoor craft fair was a painting by Susan Hely St. John. It was an 1880s portrait of a young man with his back turned to the viewer in a three-quarter view reading a book by dim candlelight. They absolutely loved the serenity of this work, and for $400 it was an example of Shapiro being able to find a diamond in the rough.

“The common denominator to both phases of my career is to do what you like, but do it well. If you can’t do something well, it might not be right for you.”

Coming from an analytical background, yet trusting his emotional response to art and artists, has been Shapiro’s unique skill in building a business and weathering the negative effects of the pandemic with a strong customer base, and an international clientele.

When the time came to leave Wall Street—Shapiro says it was “now or never”—and start the gallery, he knew his program would be all about conceptualization. While studying for his undergraduate degree, Shapiro had read Harold Bloom’s “Anxiety of Influence.” In it, Bloom discusses the psychological struggle of aspiring authors to overcome the anxiety posed by the influence of their literary antecedents. Shapiro took this philosophy with him to the art world. He understood that an artist wants to be inspired, but also wants to create something new into the canon of art history. Shapiro says that most things have been tried already by another artist—but says that it’s how you conceptualize new work into a dialogue with the past that matters. What appeals to Shapiro is the artist who directly engages in this dialogue, not to copy, but to be inspired. He sees great art as a challenge from one generation to the next. These are the artists he has sought out and shown. “Great artists talk with one another across generations,” says Shapiro, “and that’s a dialogue I want to be part of.”

Shapiro enthusiastically explains that he loves what he does every single day and couldn’t be happier with his decision. However, he did make one promise to his wife—to take the gallery seriously and run it like a business.  Keeping detailed books, spreadsheets, and observing profit and loss statements like a hawk would allow him to keep the gallery running smoothly, and keep supporting the artists that he had rededicated his life to.

In his first decade of business, Shapiro has had more than his share of successes. The show that put him on the map is Arthur Pinajian’s “Lost Paintings” exhibition in 2013. He immediately saw the power and significance of the work upon being contacted by the Pinajian Estate, but even he had his doubts at first. “I didn’t think this was the first thing collectors would be looking for, but the works were too beautiful not to show,” he says.

Shapiro recounts the story of a couple that walked into the gallery two days before the show opened and fell in love with two of the paintings. The couple couldn’t decide between the works and tried to haggle the prices down significantly. Knowing the value and quality of the artwork he was selling, he declined their offer, even when the couple said: “He’s an unknown artist; you’ll be begging us tomorrow to take the work for half price.” Unfortunately for these two collectors, James Barron—an art reporter with the New York Times—was working on an article about the artist, which came out Friday. When the couple came back on Sunday to make their final offer to the gallerist, they discovered the exhibition had sold out. From this experience, Shapiro learned to trust his eye.

Another highlight in his first years was the hugely successful presentation of Angel Ortiz (known as LA ROC) at Art Hamptons in 2013. This was the first major presentation of LA ROC who was only 14 years old when he began collaborating with graffiti artist Keith Haring in the 80s. “People didn’t know that they were partners and collaborators and that LA wasn’t some Keith Haring wannabe,” says Shapiro. Shapiro presented a sold-out gallery exhibition later that year.

The gallery’s Marjorie Strider’s exhibition, “The Second International Girlie Show,” was another big hit for the gallery.  “Here was a woman and a first generation pop artist and nobody was focusing on her.” After the 2014 show, she was included in shows at the Walker Art Center and the Philadelphia Museum of Art.

As a very strong supporter of AbEx and New York School artists, Shapiro presented “Works in Progress:  Artists in Their 80s and 90s”. This exhibition featured a series of phenomenal artists, many of whom—paradoxically—had fallen out of the limelight due to the longevity of their careers.  Among the artists he showed were Knox Martin, Paul Resika and Stan Brodsky. As a result of this exhibition he was contacted by numerous artists of that age looking for representation.  “We were so fortunate to pick up some wonderful artists, including Amaranth Ehrenhalt, who was in the Denver Museum Show ‘Women of Abstract Expressionism.’”

According to Shapiro, one key reason to have a mixed program is having the opportunity to take chances on new artists that fit into the gallery’s conceptual framework. Shapiro continues to showcase a well-balanced program that is comprised of half contemporary works and half secondary market acquisitions and/or artist estates. There are a handful of key advisors that Lawrence Fine Arts relies on to help find and select the right artists for the gallery. One of his most recent additions is American photographer Howard Schatz, whose figurative works have been placed in numerous important public and private collections. One of Shapiro’s favorite pieces is Schatz’s tongue-in-cheek interpretation of the Renaissance work “The Pietà” but this time featuring Brooke Shields. “Our photography practice is an area we plan to expand,” says Shapiro.

Shapiro spends quite a bit of time looking for artists whose careers and work deserve a reappraisal and fit into his conceptual framework.  In addition to Amaranth Ehrenhalt, he has recently agreed to represent the estates of Gandy Brodie and Angelo Ippolito, two New York School artists, and one the co-founder of the Tanager Gallery, and the estate of Robert S. Neuman, an important second generation Abstract Expressionist artist. Judith Lindbloom was a real discovery for Shapiro.  She was gay and a woman in the very macho art world of post-War New York and didn’t get the attention she deserved. “The history of the post-War period is still being written,” says Shapiro, “and artists like Lindbloom will ultimately find their way in.” He has worked with Harriette Joffe—“a real favorite and so underrecognized”– for years, and now, after her death, will represent the estate.  Early American modernist Rolph Scarlett is another favorite.

The emphasis on quality art, personalized service, and scholarship are central to his business.  He has no interest in showing second-tier art just because the artist has a “name”.

As a self-described “people person”, Shapiro is ready to get back to his brick-and-mortar gallery, attend art fairs, and start visiting museums all over the world again. Many of his clients have told him they are not buying today, but he has perfected the craft of maintaining his relationships with Zoom coffees and virtual gallery visits. He finds that many clients and potential clients are enjoying the slower pace.  He believes the art fair schedule had become too overwhelming for many. “We’ve had so many great sales this past year after schmoozing on the phone,” he says.  “You don’t get that at an art fair.”

Shapiro intends for 2021 to be his best year ever, despite the impact of COVID-19 on many art businesses. He’s used this period of time to reach out to museums and institutions—he placed eight works in museum collections in 2020– and scheduled some important exhibitions for his artists. His business style is to let the client come to the painting—“there is no hard sell for art”—and knows that showing the highest quality artist will win over his audience in the long-term. He has also used this time to conduct research on artists and movements he feels would be right for his program. Shapiro jokes that he has only begun to read through the large stack of books on his desk. There is much to be done and discovered in 2021 and beyond, and he can’t wait to share his art discoveries with the world.

Visit him online at www.Lawrence-Fine-Arts.com, and make sure to stop by the gallery next time you are out in the Hamptons. There is always something new to discover at Shapiro’s gallery, which will be opening its new Chelsea space later this year.