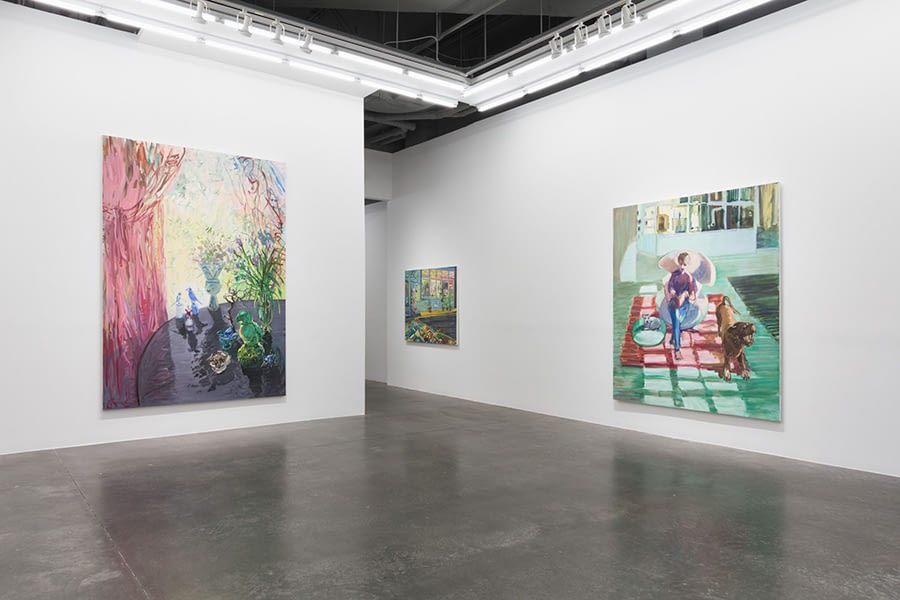 In her first solo show with Anna Zorina Gallery, Deborah Brown’s “Things As They Are” is a reflection on the world as a whole, not just the state of humanity during COVID-19 quarantine. The exhibition features new paintings that were created over the last year in complete isolation from the world. The show takes place at the 532 West 24th Street from January 7 through February 13, 2020.

The artist has spent the last ten months furiously working on this new grouping of works. Many creatives have spent their quarantine flooding social media with memes and views of their homes, but seasoned painter Brown has done the opposite and created a spectacular exhibition that has transformed the way she creates by looking within herself for inspiration.

The themes in her Anna Zorina debut depict art historical standards of self-portrait, still life, and landscape, but cumulatively, Brown paints a cohesive new body that truly captures the feeling of isolation. Though the drudgery of everyday feeling exactly the same is present, there is a lot of optimism that seems to ground every work. In the stand out work entitled Tiger, the artist depicts herself sitting in a post-modern chair seated with her legs crossed reading an unnamed book. On one side of the figure is a small dog, the other a large tiger sculpture, and the entire scene is draped in shadow and light from a paned window. With a moderately ambiguous space, the artist expresses a lot of what is going on the entire exhibition and in the world around us. There is an overall feeling of isolation, solidarity with the artist’s surroundings, and a very abstract and uncertain understanding into what is going on in the world outside. The small dog sits peacefully, while the tiger growls aggressively at an unknown enemy; surely we can all relate to one of these two ideologies being presented to us.

Compared to her earlier works, it’s quite apparent that she’s looking inward and discovering what she’s really about. The loose handling of arms and torsos has tightened up significantly, and the portrayals of her figures have become far less stylized. Having more dedicated studio time without the distraction of the real-world seems to have forced Brown into making more defined choices of representation.

Regarding her new works Brown states, “Reflecting a time of social isolation, the paintings depict individuals in domestic settings with their pets, as well as still life objects drawn from the artist’s collections. The common thread is an examination of what it means to be human in a time of loss and resilience.” The obvious reading of the works and her text is that one focuses on time passing a bit more when we have more time than things to do, and people to see, but the more relevant interpretation is that there is pleasure in slowing down to create, and for the viewer, there is now a lot more time to spend soaking in the additional layers of meaning that the artist has embedded into her work. Her choice of the word resilience sheds focus on returning to normal, but in the case of Brown’s studio work, the additional time spent perfecting these paintings is time that was well spent.

Quarantine has impacted us all in different ways, but like the juxtaposition of the dog and the tiger, there is outward and inward balance. Brown’s response has been to look at her immediate surroundings, making her, and us, look inward. Talk about an artist working alone in their studio, and how this was the ideal moment for her to take her work to the next level. She’s now taking more chances, reducing the dependence on stylizing, and has pushed her visual vocabulary. Her older work tended to lack depth, elaborate background, and vibrant color. The paintings in this show depict natural light, have more contrast, and have more interior construction than before. Brown’s telling similar stories, but now she has taken the time to fill in the details. Brown states that she, “aims to represent the consciousness of the sitter and the phenomenological act of seeing that unfolds when the viewer meets the gaze of the subject portrayed,” but now instead of only focusing on that dynamic, she has expanded her vocabulary to depict realistic spaces for her models.

The work Melancholia shows a living room full with immaculately designed features that would be worthy of Architectal Digest or Elle Décor, with a midground full of plants and furniture, and all the rest of the interior ornately arranged. Skylights features a decoratively patterned rug, window-paned shadows similar to Tiger, whereas Self-Portrait with Zeus and Peacock Screen contains a reference to her canoeist series from 2019. Likely forcing herself to self-reflect and grow during quarantine, she is looking back at her oeuvre in order to move past it. Referencing her own work within her work can be seen as a nod to Matisse’s L’Atelier Rouge, or possibly even Velazquez’ Las Meninas. Brown certainly has a vast understanding of modern art history, and has even included references to 19th century French art, and most certainly Van Gogh.

Comparing Brown to her peers Marlene Dumas or Nicole Eisenman can be a bit problematic as she has more in common with younger new figurative painters Kim Dorland or Doron Langberg. Brown leads the push into a more defined mark-making in her work, with less flash and more focus than Dumas or Eisenman. Less emphasis on the academic and much more modernism.

As we know, new figuration is going to dominate the market for a while, and powerful young dealers like Zorina have brought a breath of fresh air from the pollution that a decade of generic abstraction delivered to the art world. Brown’s slow gesture and loose handling of paint is at the forefront of reviving figurative art, and she’s now leading the movement with a more focused and detailed brushstroke. There are surely a lot of new art collectors and lovers watching Brown’s paintings with a newfound fervor to see where this pivotal show leads her to.

The exhibition is on view at Anna Zorina Gallery through February 13th, 2021, so if you’re able to safely visit the gallery, please call them to make an appointment to see these incredible works.