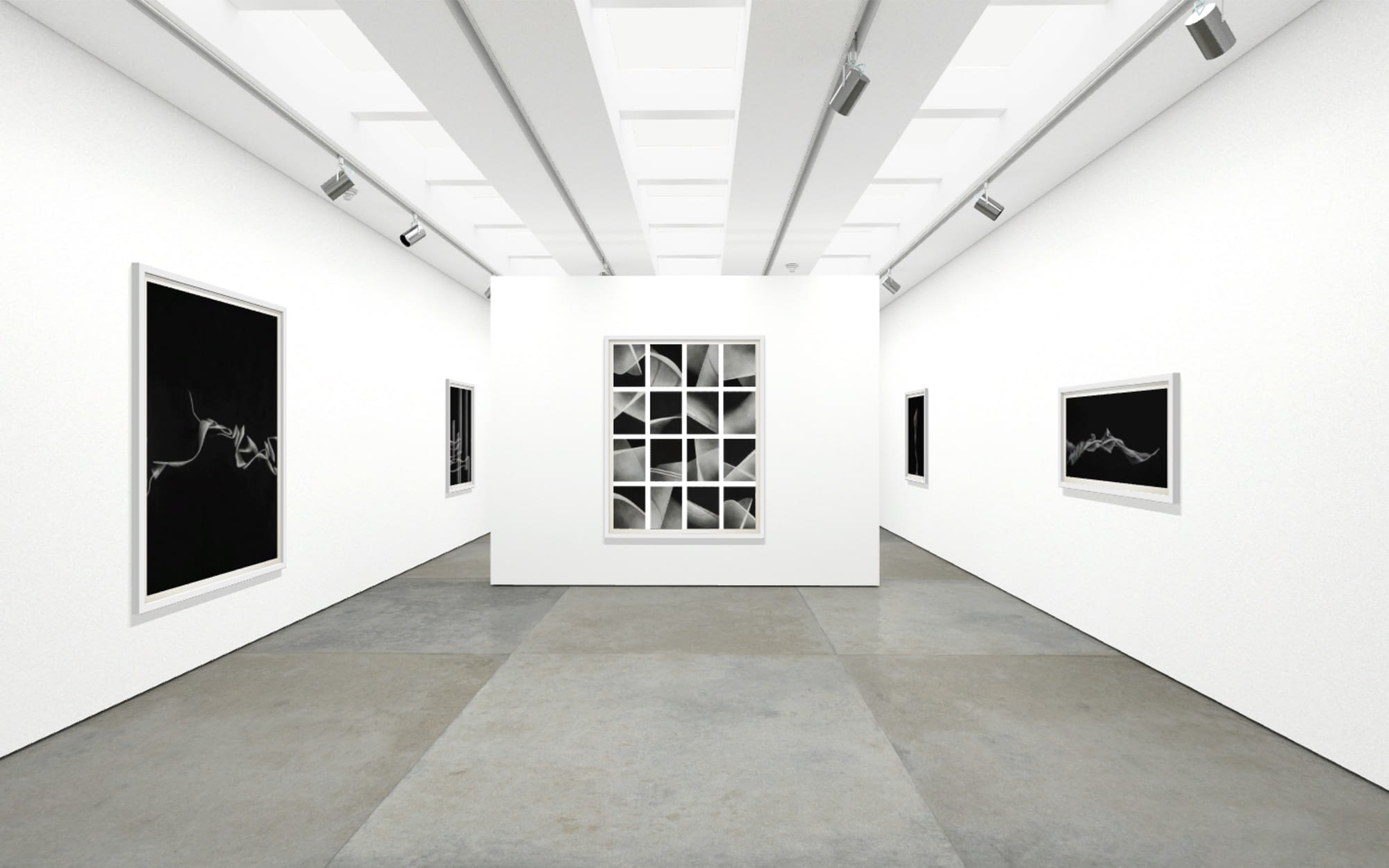 Capturing a moment that will never occur again

In her first virtual solo exhibition taking place at Robert Berry Gallery from February 11th – March 14th, 2021, New York-based artist Taney Roniger has created large-scale charcoal on paper drawings that are recreations of tiny gestural drawings that she had made in under a minute. These monumental re-creations take up to a hundred hours to create per work.

The original process of creating spontaneous gestures is all about capturing a moment that will never occur again. They are expressions of unconscious impulses, both internal and external. The laborious recreating the spontaneous is a way to preserve a specific moment of time. She understands that there is a bit of humor in the process, but it’s not about that. It’s about capturing the energy and uniqueness of an instant that is typically lost forever. Similar to her early work where the process of creating was depicted on the canvas by creating patterns and sequences of pin prick holes added to an ornately surfaced media. In those works, the specific process of creation is readily apparent to the viewer, whereas in these new drawings, one only sees the accumulation of time spent marking charcoal on paper.

Other Rivers refers to Heraclitus’s dictum that you never step in the same river twice, as the river is always changing, and so are you. It refers to the fact that the artist is trying to recreate something that cannot be re-created–a particular moment in time–so it’s not the same river but rather another. The charcoal drawings might be thought of as odes to that moment that will never reoccur, and also that the viewer is not the same person they were when they first laid eyes on these pieces. Everyone and everything is in a constant state of flux.

The two main elements to Roniger’s work are finding the balance of light and dark, and a making a dense but textured surface with nothing but charcoal and the occasional smudge of a finger.The forms within the charcoal are mostly organic, flowing forms. They move, pulsate, throb, twist, turn, writhe, flicker, and luminesce which are all essential to solidify–and often elaborate on–the movement from the original gesture the works are based on. They don’t signify anything specific, and are meant to be experienced viscerally, like visual music. The movement they induce in the viewer is their “meaning” (along with whatever emotions, thoughts, feelings, etc. arise in said viewer when in their presence).

The occasional vertical and horizontal banding elements that appear in many of the works create alternate rhythms that serve as a counterpoint to the more organic forms. The combination of the natural and the organic might also be derived from Roniger’s dual locations of living in New York City and the Catskills. The balance of nature and manmade also come across in the work, and is clearly the sign of an artist entering into a mature phase with a studio practice that has explored a lot of ground to be able to create such bold and powerful works so efficiently across the body of 13 unique drawings. The works feature elements of trees, flora, fauna, and vast empty space, combined with hard edges, organized grids, and densely arranged compositions.

The scale of the drawings is also quite important. The majority are roughly human-sized, meant to be encountered as other bodies. They are intended to make the viewer more aware of their body, and of the profound intelligence of the body. The body knows things we don’t. Roniger intends for us to dismantle the long-held assumption that the body is dumb, that our cognition happens exclusively in our head. We now know that the greater part of our cognition happens deep inside our bodies. What we call our intellect constitutes a tiny fraction of our overall intelligence.

This is Roniger’s first virtual exhibition, and also the first Robert Berry Gallery show to utilize the innovative technology created by the team at Walter’s Cube. Walter’s Cube was the first company to digitize contemporary art exhibitions, and is a way to eliminate barriers between exhibitions and audiences. This obstacle, which has only been enhanced during COVID-19, has become a challenge that artists are working to solve. Roniger quickly saw the opportunity to present her new body of work in an exciting new way that lets the viewer see the show from their phone, their office, or even from their couch.

Continuing the ongoing trend of innovative virtual exhibitions, Robert Berry Gallery has again put forth light and positivity to the art world through a beautiful and powerful new conceptual body of work. Roniger’s solo show takes place at Robert Berry Gallery and is on view at www.RobertBerryGallery.com. Click through and experience the magic of time in the virtual walkthrough.