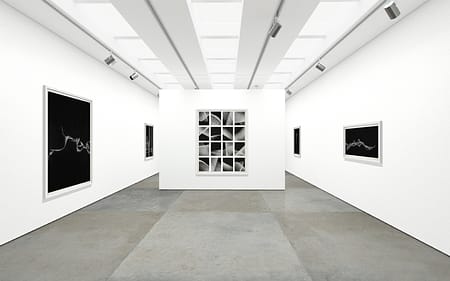 Capturing a moment that will never occur again

In her first virtual solo exhibition taking place at Robert Berry Gallery from February 11th – March 14th, 2021, New York-based artist Taney Roniger has created large-scale charcoal on paper drawings that are recreations of tiny gestural drawings that she had made in under a minute. These monumental re-creations take up to a hundred hours to create per work.

The original process of creating spontaneous gestures is all about capturing a moment that will never occur again. They are expressions of unconscious impulses, both internal and external. The laborious recreating the spontaneous is a way to preserve a specific moment of time. She understands that there is a bit of humor in the process, but it’s not about that. It’s about capturing the energy and uniqueness of an instant that is typically lost forever. Similar to her early work where the process of creating was depicted on the canvas by creating patterns and sequences of pin prick holes added to an ornately surfaced media. In those works, the specific process of creation is readily apparent to the viewer, whereas in these new drawings, one only sees the accumulation of time spent marking charcoal on paper.

Other Rivers refers to Heraclitus’s dictum that you never step in the same river twice, as the river is always changing, and so are you. It refers to the fact that the artist is trying to recreate something that cannot be re-created–a particular moment in time–so it’s not the same river but rather another. The charcoal drawings might be thought of as odes to that moment that will never reoccur, and also that the viewer is not the same person they were when they first … Click here to read more