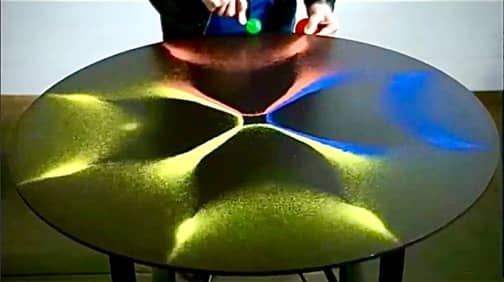 In a conversation about, “Making,” Hosojima said, “The point of contact is what making is to me…to make, play, and exhibit.” This point of contact is also evident in Kenichi Kanazawa’s work, “What is Making?” (2021), a 19-minute video, commissioned by Hosojima. We see his hand holding the rubber mallet, the mallet hitting the steel circular disk, and sand moving on the steel disk. The vibrating disk acts as a platform for various geometric pattern formations. Kanazawa studies cymatics. He states, “…it is a visual demonstration of the power of sound to create order out of chaos. Sounds starts to move in geometric form.”

Hosojima aims to reevaluate Happenings in the 1950s and 1960s in how he sees “making.” As he and I walked around the exhibition together, I thought of Yoko Ono’s early happening in the 1960s. She sat on a roof in New York selling rocks. Ono’s piece also had no sense of mission. Ono, like her contemporary, John Cage, always utilized performance, music, sound, chance, and visual art. Both artists also used themselves in their work. The artists in “From the Viewpoint of ‘Making,’” share Ono and Cage’s use of sound, visual art, performance, and chance. Yet, these artists have a uniquely different way of using these strategies. They also produce different meanings in the 21st century. The works by Kanazawa, Ken Ikeda, Rie Nakajima, and Takahiro Kawaguchi are projected onto large video screens. Hosojima differs in that his video is shown on a flat screen monitor and he does not perform. He maps layered drawings of the cities that he’s walked in while listening to “Grazing Sound,” an original composition debuted in “Making.”

In Kanazawa, Ikeda, and Kawaguchi’s work we see their bodies in glimpses. In Kanazawa’s video, we see him look down at his lower body and his hands. In Ikeda’s video, we see a frontal shot of him blurred and a back shot of him looking at the instruments he has made, collected on shelves. In Nakajima’s video, we see her full body standing and bending down to turn on small motors that begin to ‘play’ the many found objects placed together on the floor. The audience stands around Nakajima as she stands up and down to play each motor and let the piece flow. The audience and the architecture of gallery are a part of her performance. In Kawaguchi’s video we barely see him in a dark space with a blue light and hear sounds as he attempts to make a chair. He has no ‘mission.’ His focus is on in the act of making itself – the movement, the sound.

Each work has one pair of headphones to listen to the sound of the videos. The individual audience member’s experience with the artist’s work is valued. The revolution, albeit an individual one, is that a viewer must listen, watch, and spend time with each piece alone. These works are about offering an experience to each person who is willing to engage with it.

Tom Cohen, who gave a talk at the start of the exhibition said, “The motif of ‘Making,’ then, perhaps packaged as a capturing of process, of a present’s flux, is rather a symptom of the deconstruction of Western poiesis’ capture and support of Anthropocene dead-ends today (all referenced to energy).” Cohen also used the word UNMAKING in his writing about the show. Cohen’s point of deconstructing the Western idea of making is also defined by Hosojima’s perspective on ‘making.’ For him, “as a maker you are the first audience…you cannot explain when you stop or begin. This show is about consciousness.”

The audiences that live inside of Hosojima are what Maurice Merleau-Ponty refers to as a “…pre-predictive of the world’s makeup. The world and the sense of self are the emergent phenomena in an ongoing ‘becoming.’” In “From the Viewpoint of ‘Making,’” Hosojima’s collaborative curatorial project, artists who understand the process of ‘making’ and ‘becoming,’ are celebrated. As Merleau-Ponty reminds us, individual consciousness is always connected to the world. What we focus on is within our power – and is our power.