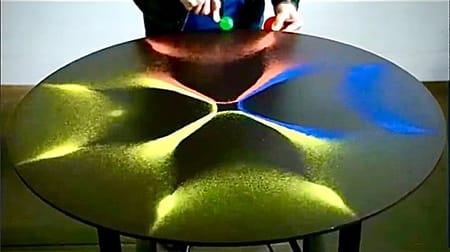 In a conversation about, “Making,” Hosojima said, “The point of contact is what making is to me…to make, play, and exhibit.” This point of contact is also evident in Kenichi Kanazawa’s work, “What is Making?” (2021), a 19-minute video, commissioned by Hosojima. We see his hand holding the rubber mallet, the mallet hitting the steel circular disk, and sand moving on the steel disk. The vibrating disk acts as a platform for various geometric pattern formations. Kanazawa studies cymatics. He states, “…it is a visual demonstration of the power of sound to create order out of chaos. Sounds starts to move in geometric form.”

Hosojima aims to reevaluate Happenings in the 1950s and 1960s in how he sees “making.” As he and I walked around the exhibition together, I thought of Yoko Ono’s early happening in the 1960s. … Click here to read more