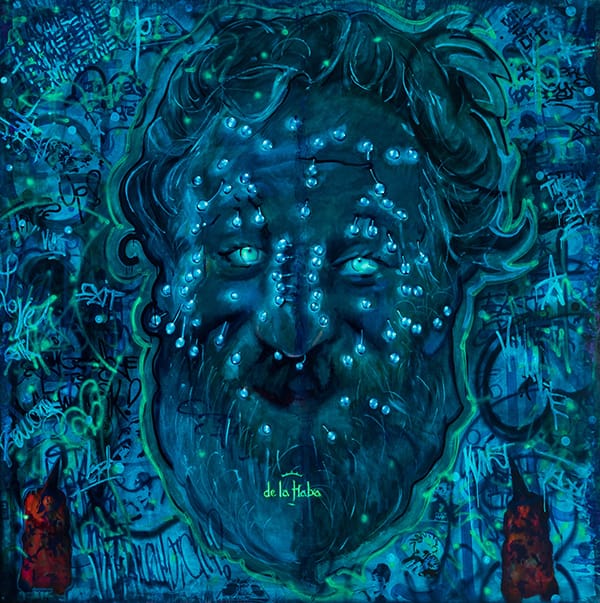 A skilled painter with a pedagogical lineage that stretches back to Jacques Louis Davide, he is an exemplary practitioner of fine art whose conceptual practice resists categorization. Gregory De la Haba’s work explores themes of addiction, contemporary notions of masculinity and Duende, a heightened state of emotion, expression and authenticity derived from pure artistic expression. It is from this place that the artist unlocks his true self—both in art and in life.

The three unknown guys who created Laocoön and His Sons on display in the Vatican. This work, and others like it from antiquity and from the Renaissance.

I didn’t know what the other choices were. When you’re drawing since childhood and all you care to do is look at art such a career choice almost becomes predetermined.

Clearly the pandemic put things in perspective as far as what’s relevant (painting) and important (family). I’m content cooking for the family, and painting. Nothing more, really.

Unfortunately, when I do go out I see the pandemic has brought about more homelessnes and people in dire need of help. On that note, my work has always had a strong focus on the trials and tribulations of humanity and I can’t help but capture some of the present hardships surrounding us at the moment. In that regard, there is a bit of documentary-like thematics pertaining the work.

All I know with certainty is that I’m different from everybody else out there. Also, I think it best for others to delve into that arena of comparisons. An artist should only focus on what they like and dislike about painting and take it from there.

Ah yes, it’s an art unto itself to know when to finish. And for me, it usually happens late at night.

There’s definitely more emotional gravitas which is precisely what I’m seeking to capture. And there’s more of a convergence—or the right mixture—between the materiality of the picture (underpainting, expressive brush/mark makings) and the manner of how I’m painting (staying within the lines less, so to speak) that adds to this emotional charge.

It was definitely advice I received from Peter Beard more than 20 years ago now. I won’t tell you exactly what he said because you can read about in Graham Boynton’s book on the photographer coming out next year from St. Martin’s Press. But it took place at his home in Montauk and we spoke for hours drinking Kettle One & Clamato and smoking these giant spliffs. The conversation was entirely on art with some bullfighting and surfing thrown in for comparative measure. His words were nothing short of encouraging. Something well needed at that moment in time.

I’ll be having a show with LA-based artist, Danny Minnick, in Dusseldorf, Germany at Geuer & Geuer Gallery. Also, a number of projects for Pulpo Gallery in Murnau am Staffelsee, outside of Munich. One is a book we’re publishing on photographer Tom Warren who began taking photos of New York artists and art-world personalities starting in 1979. He captured everybody: David Wojnarowicz, Marlyn Minter, Pat Hearn, Keith Haring, Rick Prol, Martin Wong, Lady Pink, and countless others. He’s been sitting on this treasure trove for years and I was told about him by Judy Rifka who, by the way, is having a very important show with Pulpo Gallery this September that I’ve been working on for over a year. It’s going to be epic.

Under appreciated is less important than under valued. Especially when the artist I have in mind is still living. Judy Rifka is a widely recognized, important American artist. Rene Ricard and countless other critics wrote glowingly about her for years beginning in the early 70’s. She’s in more than twenty museum collections around the world, took part in important exhibitions including Documenta and the Whitney Biennial (two of them) and had solo shows around the globe, from Dubai to Switzerland. She even had shows with her buddy Keith Haring in London and New York. If any young artist today had such a resume their works would be selling for six figures at auction. Her’s should be. And they will. Mark my words.

To learn more about Gregory and his work, please visit www.DeLaHaba.com.