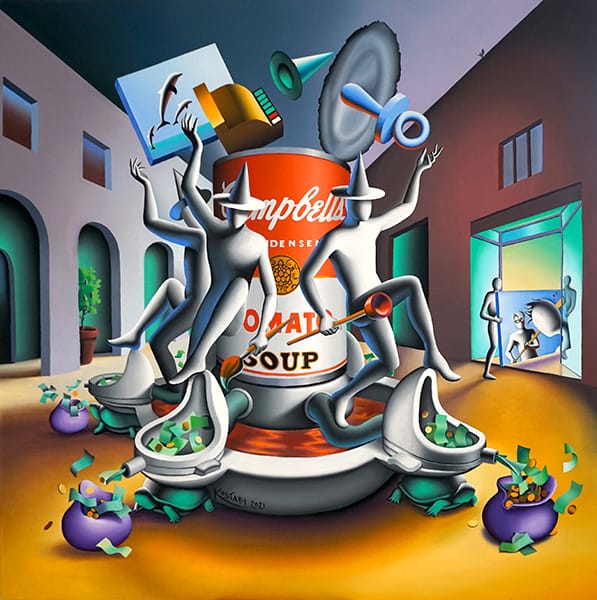 Mark Kostabi is most known for his paintings of faceless figures which often comment on contemporary political, social and psychological issues, and which have visual stylistic roots in the work of Giorgio de Chirico and Fernand Léger.

That’s sort of like asking which city I prefer better: Rome or New York, where I have homes in both. I like each city equally but for different reasons. So the best I can do here is list some of my favorites: Caravaggio, Bernini, Picasso, Warhol, De Chirico, Hopper, Magritte, Dali’, Arman, Picabia and Duchamp.

I had natural talent and a strong desire to draw at a young age. All the positive encouragement made it an easy career decision.

Amanda Gorman’s poetry. The pandemic. New technology. And the concept of recycling and revisiting earlier works and ideas of mine and improving them.

It’s the unique combination of my sfumato, chiaroscuro simplified faceless protagonists in narrative contexts that are universally relatable.

Usually when I sign it, but there have been many occasions when I’ve revisited earlier pieces in the spirit of improving them. Sometimes years later, therefore several of my paintings have two dates on them. It’s like collaborating with my former self.

There’s much more of it. Plus the surfaces tend to be smoother. And the narratives lean more towards the positive more than before. And when my subjects deal with current events (like the pandemic) or new technology, the imagery is more topical. I also make mixed media paintings on paper now which do not have smooth surfaces. This is new development.

I was very proud to be able to bring my mother to the Metropolitan Museum in 1986 to see my large painting called Requiem, hanging near Picasso and Cezanne masterpieces. My two retrospectives, one in Tokyo and the other in Tallinn, Estonia, were also triumphant and meaningful occasions. Hearing Andy Warhol tell me I make “great pictures,” being photographed by him on many occasions and knowing that he collected 15 of my 1986 Bloomingdales bag was a career highlight. Also that day Larry Gagosian came by my studio and bought 10 large paintings and 100 drawings – that was exciting!

My current show at Martin Lawrence Galleries in SoHo. Many of my paintings are currently on display through March 2022 at the Nassau County Museum of Art as part of their Art of Music show. And I’m working on paintings featuring Venice for a big show there being planned to run concurrently with the Venice Biennale.

My 6 rules on how to become a rich and famous artist are still valid. 1. Make great art 2. Live in New York. 3. Circulate socially in the art scene. 4. Be professional. 5. Have a story. 6. Get other people to work for you.

Definitely Arman, who is in art history books and many major museums, but not enough new art world people know how prescient and influential he was. Enrico Baj is another. Walter Robinson is doing very well and is not unknown but he should be just as acclaimed as his Metro Pictures colleagues, Cindy Sherman and Richard Prince.

To learn more about Mark and his work, please visit www.MKostabi.com.