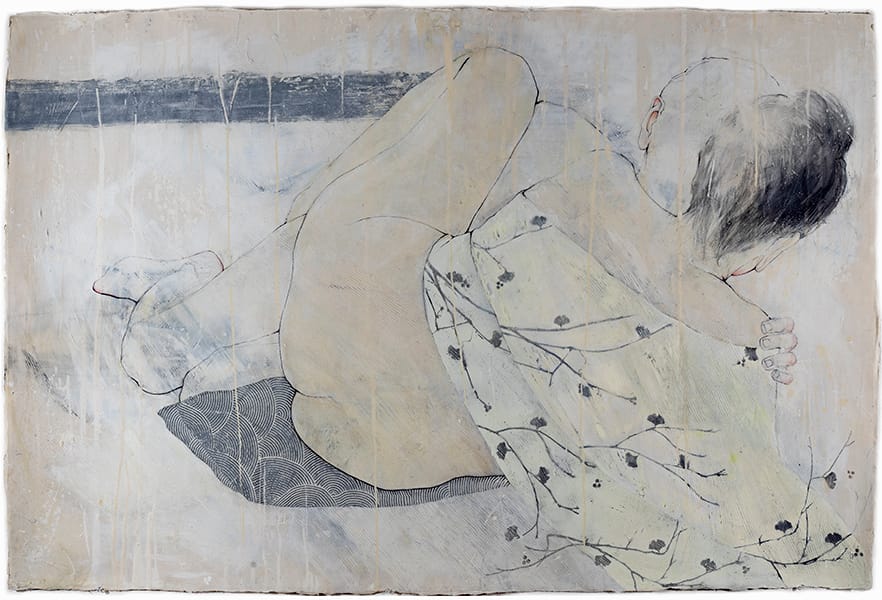 Bobbie Moline-Kramer was born in Fort Madison, Iowa, in 1946, and is now based in California. She traces her interest in art to a course she took at a local community college with Conceptual art pioneer John Baldessari, and to assistant work she did with Allan Kaprow, the originator of “Happenings.” As a painter, Moline-Kramer has pioneered a unique fusion of hyperrealism and gestural abstraction; she has also worked in mixed media. Drawing on personal narrative alongside art-historical reference, she has produced several distinct series while maintaining a deliberate compositional heterogeneity. Moline-Kramer teaches oil painting and is an adjunct professor at California State University, Long Beach.

Initially I became an artist because I was good at it, thus getting lots of praise from assorted adults. Then as I became older, I magically fell in love with both the concepts and the processes of making art. To this day, facing a blank surface still excites me with its unlimited possibilities.

My latest series American Shunga celebrates both life and love. 2020’s lockdown was for me a time of paring the extemporaneous with a rediscovery of the essence of living…love.  Of the importance of the combination of love and spirituality in trying to achieve the ultimate in love, a Greek/Christian concept called agape. Agape love is a selfless, sacrificial, unconditional love which I think I captured in a delicate piece that’s part Tales of Adjusted Desire online at Robert Berry Gallery.

Since being an artist doesn’t pay the bills, I trained as a biomedical illustrator and focused on that for many years while working on my “art” on the side; like most artists. But, this worked out really well as my work is a combination of abstraction and realism, which is in itself different from what’s out there.

Well perhaps a work is never really finished? Which is why I start with the concept, working until I feel I have exhausted all avenues and stopping when I start to duplicate my own work. For that reason I seldom return to rework a piece, and I like deadlines and working in groups or series so I can explore a concept to its fullest.

Each body of work is different; beginning with a concept guarantees that and the processes I use vary to suit the concept. Also, the concepts are different because I continue to evolve physically and spiritually as an artist and hopefully as a human. In an earlier series Color Coded Emotions, it was heavily based on concept and process even before I started painting. First a group of models were photographed to depict basic emotions, those photos were then shown to a focus group which were asked to select the best image representing that emotion. I would then realistically paint on a 6×6 inch panel the face of that image. Then the next layer was an abstract painting which masked as well as revealed the face below. The title for each piece was another layer.

For me the highlights are the people I’ve met, those whose faith in my talent has reinforced my own faith in myself. They are behind every show, award, gallery, and press I’ve received; thank you. Ultimately I am a people person. Those things I now think will stand the test of time?  I’m being honored by my high school in Fort Madison, Iowa this May, and the beautifully filmed and edited video of my work.

2021 is proving to be amazingly fruitful; I’m grateful. I have had shows at Gabba Gallery (Los Angeles), Lichtundfire (New York), Robert Berry Gallery (New York), Cross Contemporary Partners (Long Beach), Joyce Goldstein Gallery (Chatham), and have two museum shows coming up, one at University of South Dakota and the other at San Louis Obispo Museum of Art.

I would advise an emerging artist to apprentice at a gallery as well as take classes in business and advertising.  This way you learn the ins and outs of the art business, but you see first hand how relationships between a gallery and an artist really works. Being a working artist affiliated with galleries requires knowledge of both business and self-promotion.  You have to understand contracts with who does what, commission split, who’s responsible for insurance, etc and you have to know promotion to promote yourself because you can’t rely on a gallery to do everything for you.

To learn more about Bobbie and her work, please visit www.MolineKramer.com.