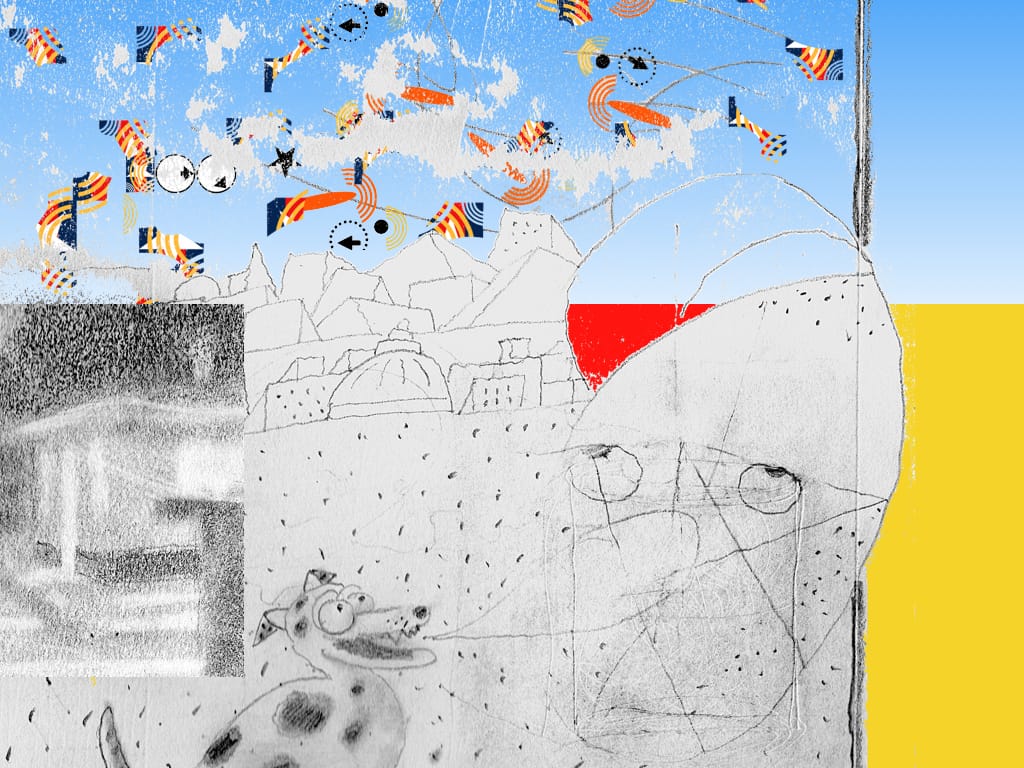 The human figure is the given in Lawrence Charles Miller’s visual equations. He creates pictures that imply their own fiction, making pictures within and about pictures. He is known for his sense of humor, which is often evident in his art. He has exhibited extensively across the United States, including exhibitions in New York City, Los Angeles, Seattle, as well as exhibition abroad in Wales, Tijuana, and San Paulo. His work is in the permanent collection of MOMA in New York City; MOMA in Wales, UK; MuBE, Sao Paulo; LACMA, Los Angeles; and Fluxus Museum in Texas.

Leonardo DaVinci. On each viewing his drawings seem to draw themselves anew. This sensation of movement ends in a mighty stillness in his paintings. Here I sense a timelessness that gives them a contemporary attitude. To me it’s oddly American. I think of Warhol’s electric chairs. Hopper’s rooms. Pollack’s thickets of time.

Well, I come from a working-class family in a gritty city. My mother’s family were Italian immigrants, and my father was Pennsylvania Dutch. It was either the steel mill or something else.

My parents bought a set of encyclopedias. There was a section about painting in the P volume. My drawing habit switched from copying comics to copying the old masters. Later, libraries were crucial. My inspiration became modern art and poetry.

Recently, my work has become something else. It is different relative to what it had been before. Is it different from everything out there? Maybe, in the fingerprint sense. Perhaps, like everyone, I’m striving to make the transitory permanent. I think I’m failing. That’s why I do it over and over again.

When the battlefield is overtaken by a superior and poignant design.

I don’t know if my current body of work is Art. That is how it’s different.

Starting in late 2019 I began drawing every day. Hundreds of drawings flowed into 2020-21. Scanned digitally as they were completed, the original graphite drawings were filed away. When I reviewed them, I thought I had wasted my sequestered time. The drawings were minute in comparison to the large paintings I left in the studio. But the drawings were seeds; authentic in their immediacy.

By manipulating the scanned files, I made what I considered paintings. The final corruptions existed solely in the electronic ether until the images were professionally printed with archival ink and paper. It was then that I realized they comprised a cohesive suite.

My work is a steadfast exploration.

I worked as a medical, editorial and military illustrator.

The 2009 show A Book About Death at the Emily Harvey Foundation Gallery in Manhattan led to a series of international and domestic shows that mark the beginning of my independent professional emergence.

After two years of productive isolation I find that everything has changed concerning my work. These relatively small “prints” beg to be seen as a whole – framed to punctuate their cinematic trajectory. Simultaneously, I sense a way forward with paint on a larger scale.

To learn more about Charles and his work, please visit www.OxenDrawn.com.