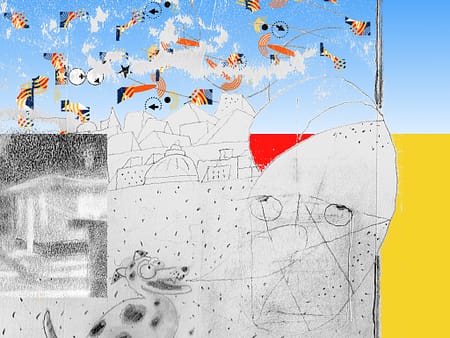 The human figure is the given in Lawrence Charles Miller’s visual equations. He creates pictures that imply their own fiction, making pictures within and about pictures. He is known for his sense of humor, which is often evident in his art. He has exhibited extensively across the United States, including exhibitions in New York City, Los Angeles, Seattle, as well as exhibition abroad in Wales, Tijuana, and San Paulo. His work is in the permanent collection of MOMA in New York City; MOMA in Wales, UK; MuBE, Sao Paulo; LACMA, Los Angeles; and Fluxus Museum in Texas.

Leonardo DaVinci. On each viewing his drawings seem to draw themselves anew. This sensation of movement ends in a mighty stillness in his paintings. Here I sense a timelessness that gives them a contemporary attitude. To me it’s oddly American. I think of Warhol’s electric chairs. Hopper’s rooms. Pollack’s thickets of time.

Well, I come from a working-class family in a gritty city. My mother’s family were Italian immigrants, and my father was Pennsylvania Dutch. It was either the steel mill or something else.

My parents bought a set of encyclopedias. There was a section about painting in the P volume. My drawing habit switched from copying comics to copying the old masters. Later, libraries were crucial. My inspiration became modern art and poetry.

Recently, my work has become something else. It is different relative to … Click here to read more

Matt Roe has been showing international for over 20 years in galleries, art festivals, and digitally. The world has changed since he started creating a long time ago along with reproduction techniques, technology has also fused its way into our general living space. This same process of human evolution has pushed him in that direction when it comes to art and his creative process. Roe has always had a passion for pushing the bounds of creative talent whether it be framing artwork, digital photography, or with abstract works in which he tries to push the bounds of each technique in their own regard.

Every creative path has advanced on its own including his passion for photography and creating digital artwork. The artist discovered a process where a photo is fused onto high gloss aluminum using attributes from the metal to highlight the details of the digital artwork, much the depth of brushwork with paint. This style comes to life in different lighting and produces a life of its own well beyond what the original photograph looked like.

For me it’s not all about one artist at all. I’ve been influenced by many different artists through many different times in life. In my early days of creating, it was Dali, Dr Seuss, and Van Gogh. Dali was for his symbolism, Dr. Seuss for creating a whole world from what he saw in his everyday existence, and Van Gogh for his use of texture and color. Today I would say the street artists that make sociological commentaries in their work in all forms of creating, and Warhol for his … Click here to read more